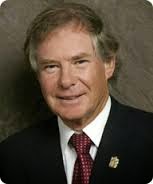 Michael Westfall seems to be just a guy with a website (though he doesn’t seem to view himself that way) and despite being the origin of a copious amount of rapture-babble, wingnuttery and denialism we cannot quite bring ourselves to give him a separate entry.

Ron Wexler is probably not a household name either, but Wexler – an Orthodox Jew – is or was at least the leader of something called the The Commandments Commission, whose members include an impressive array of familiar wingnuts from David Barton to Benny Hinn, and which was endorsed in a Congressional resolution submitted by Todd Akin.

Wexler himself is of course as crazy as they come. He has suggested that natural disasters such as hurricane Katrina and Hurrican Rita are God’s punishments because “[i]t was revealed to me that in numerology, the numerical value of the Hebrew letters that make up the name Rita + God is equal 620. The number of all the Hebrew letters that make up the Ten Commandments is … 620! Is there a connection?” His really big idea, however, is promoting Ten Commandments Day with his Ten Commandments Pin: “imagine people of faith all over America – and in every area of society – identifying themselves with the standard of righteousness upon which this nation was founded” and he assures them that “God’s hand was on this artist” as he designed the pin, which  in “striking gold plated tone.”

And apparently the absence of the Ten Commandments from US court houses is a primary reason for why weather – and homosexuals – are running amok in the US at the moment.

Diagnosis: Some suggests it’s quite simply an ordinary scam operation, but even if that were the case Wexler would be notoriously nutty.