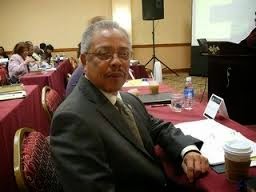 Willie Wooten is the founder of the New Orleans-based Gideon International Christian Fellowship and self-proclaimed Apostle who claims to have “had a positive influence in the governmental arena and has been instrumental in preventing ungodly laws from being enacted within the state of Louisiana and also throughout our nation.” He was also an official endorser of Texas Governor Rick Perry’s 2011 The Response prayer rally. Which “ungodly laws”? Oh, but you have already guessed that, right? Wooten is a critic of gay rights, has compared being gay to polygamy and incest, and argued that “homosexual marriage is not a civil rights issue; it’s a moral issue. It is a deviant type of behavior and lifestyle. How do they do it? It’s too nasty.” His efforts have accordingly been targeted at legislation in Louisiana that would grant gay and lesbian couples legal rights and protect gays and lesbians from employment discrimination and school bullying. Indeed, Wooten claims that since black legislators have often proposed such legislation, the black community faces a curse from God; in particular, disasters “heaped upon” Louisiana's black community occur because “a lot of our legislators are not on the side of God and His moral laws.”

As a matter of fact, Wooten has written a book about how the African American community is under a curse from God because black leaders have promoted liberalism and the Democratic Party. Breaking The Curse Off Black America is a lengthy screed blaiming African American political and religious leaders for crossing God through “immorality,” causing God (who apparently assigns punishment according to racial delineations) to punish African Americans by curses of “adultery, incest, children from incestuous union, children born out-of-wedlock, destroyed virginity, bestiality, homosexuality, lesbianism.” So there’s that. Also, “[t]he man of God could not have his testicles damaged or defective. This speaks of his inability to procreate. There is an inability by far too many black leaders to produce sons of God who are truly spiritual people.” The medical community should apparently take note.

Diagnosis: Hopelessly idiotic bigot. One of many such, of course, but that’s hardly an excuse.
Posted by G.D. at 11:07 AM