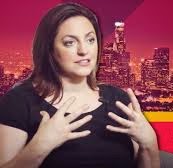 Lisa Williams is apparently British, but she resides in Los Angeles (nominally, at least – mostly she seems to reside far, far away from anywhere in reality) and is hence arguably qualified. Williams claims to be a psychic medium, and is the granddaughter of celebrity fraud Frances Glazebrook. Accordingly, Williams is mostly famous for her extensive use of cold readings, which makes one wonder about the extent to which she even thinks she’s magical.

By giving a “reading” to a senior staff member of television host Merv Griffin, Williams managed to initiate a substantial television career for herself with Lisa Williams: Life Among the Dead (2006–2007) and Lisa Williams: Voices From the Other Side on the Lifetime network (“I am not a skeptic anymore [implying that he ever was] because I have seen this woman do some of the most incredible things,” said Griffin [demonstrating that he never was]). The shows followed Williams around while she “communicated” with the dead, investigated haunted houses, and engaged in similar nonsense. Presumably to keep her audiences interested she claimed co to have spoken with the spirits of Bob Hope, Princess Diana, Natalie Wood, Marilyn Monroe and Ray Charles. Matt Lauer once received criticism for not calling Williams out when Williams claimed to see a ghost standing behind him – after all, mediums scam people for significant sums of money every year, and one would presume that Lauer had some journalistic duty to investigate Williams’s assertions. Williams has also – but of course – appeared on Oprah to “diagnose” her studio.

Diagnosis: I suppose we are supposed to say that we suppose that Williams at least believes that she has magic powers herself. We cannot quite bring ourselves to pass that verdict, however, and choose to leave things instead – diplomatically – a bit open. Those who listen to her definitely suffer from severe critical thinking skill deficiencies, at least.
Posted by G.D. at 10:17 AM