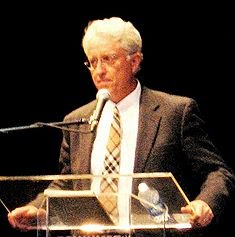 Jack Thompson was a legendary Florida lawyer, infamous for his campaigns against video games and his attempts to whip up moral panic over those. Thompson blames video games for being the primary cause of violence and crime among young people. He doesn’t care about facts, of course, and became notorious for popping up as a news network “guest speaker” in the aftermath of school shootings to claim that the shooter practiced killing with violent video games. He even accused the U.S. Department of Defense of colluding with video game producers (and unholily so).

His targets also encompassed rap music and Howard Stern, and his general outlook is probably well exemplified by his dismissal of a 2 Live Crew album by: “the ‘social commentary’ on this album is akin to a sociopath’s discharging his AK-47 into a crowded schoolyard, with the machine gun bursts interrupted by Pee-wee Herman’s views on politics.” Not quite, but Thompson argued that it was therefore not protected by the First Amendment. Not quite that either. Thompson also wrote to Bruce Springsteen’s manager about how 2 Live Crew misused a sample of Springsteen’s gloriously pro-American “Born In the USA” in their social criticism. No, Thompson didn’t understand what Springsteen’s song was about.

Unfortunately for lovers of unintentional comedy Thompson was disbarred by the Florida Supreme Court, effective October 2008, for “professional misconduct” (he walked out on his own hearing, apparently, though responded here), thereby ending a long-running feud between him and the Florida Bar Association (which Thompson accused of having a secular humanist agenda – in 1993 he even tried to challenge the constitutionality of the Florida Bar itself; the court was not impressed with his filings). The reason for disbarring him, however, was his filing frivolous lawsuits and defaming various people who opposed him, even accusing them of child pornography. Thompson responded to the charges by claiming to be a victim.

While in the game Thompson was notoriously trigger-happy (e.g. here), and his techniques included mass-mailing thousands of game industry employees and threatening to press harassment charges against them when they responded, calling Sony a “Pearl Harbor 2” for their video games, his filings related to the 1997 Heath high school shootings (dismissed for failing to present a legally recognizable claim), and endlessly repeated suits over GTA, Bully (allegedly violating Florida’s public nuisance laws), Manhunt and Mortal Kombat. More examples here (and a fair assessment of Thompson’s claims here). According to Thompson “[w]e have a nation of Manchurian Candidate video gamers out there who are ready, willing, and able to massacre, and some of them will.” Evidence: intuition. Facts are a conspiracy to discredit him.

Here’s a report from Thompson’s interaction with Penny Arcade, and here is another (and another, and another).

Diagnosis: High-profile, hysterical single-minded tragedy chaser with not a shred of concern for reality or facts that do not fit with his agenda. He probably won’t harm anyone anymore, however.
Posted by G.D. at 10:53 AM