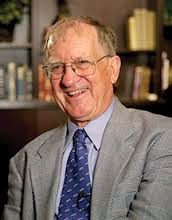 Herbert W. Titus is an American attorney, writer, politician, and supporter of the Christian Reconstructionism movement, known for his dabbling in pseudohistory (he made an appearance for instance in Kirk Cameron’s 2012 “documentary” Monumental) and for running for Vice-President of the in the 1996 U.S. presidential election on the Constitution Party ticket (running mate of the late Howard Phillips). He was once a respected law scholar, but left his tenured position as professor of law at the University of Oregon in 1979 to become a member of the charter faculty at Oral Roberts University and later dean of Regent University’s law school.

We note that Ed Brayton repeatedly denies that he is a dominionist, but Titus’s actions make it fair to label him a “supporter” of certain dominionist views – he is committed to exercising what he believes is a “dominion mandate” to “restore the Bible to legal education,” i.e. to teach that Christianity is the basis of our law, that lawyers and judges should follow God’s law, and that the failure to do so is evidence of a “tyrannical,” leftist agenda; and if not necessarily dominionism proper it is definitely an attempt to make fundamentalist religion the foundation of the law. Indeed, Titus claims that religion, as used in the Establishment Clause (“Congress shall make no law respecting an establishment of religion”) does not mean, religion. Rather, Titus insists that this clause means that Congress cannot make you do anything that you are otherwise commanded by God to do: in other words, Congress cannot flout God.

To get a further idea of what kinds of positions he supports, Titus has argued that the Bible shows that Obama is ineligible for the presidency of the US. According to Titus, both your parents need to be citizens of the US (that’s established by the Bible), and “the form that was produced by the Obama administration indicates that his father was not an American citizen. Where people said, where race usually you put ‘black’ but it has ‘African,’” which settles the matter: “I think this president does have a divided loyalty. I think he is more loyal to his African father than he is to the American nation.” Yes, the argument is as mind-bogglingly, hysterically insane as it appears to be (elaboration here). Titus also appears to think that Obama is the harbinger of fascism for signing an executive order establishing the National Prevention, Health Promotion, and Public Health Council; his tortured reasoning was duly reported by the WND, of course.

As for marriage equality Titus has said that the government should define marriage based on Leviticus and “screen out those people who were violating the rules the Bible laid down as to who could be married and who could not be married.” He was also a signatory to what has become known as the mother of all prop 8 briefs.

As for gun rights, Titus maintains that the NRA “compromises” on gun rights. According to Titus the Second Amendment isn’t solely about firepower: “You have to see it in its spiritual and providential perspective.” It’s not only a matter of a right to bear guns; you have a religious duty to do so. Indeed, we have a religious duty to arm Americans against the government and the “totalitarian threat” posed by “Obamacare” and “what Sarah Palin said about death panels.”

Along with our old friend Roy Moore, Titus was an original drafter of the Constitution Restoration Act, which sought to take out of federal court jurisdiction cases that involved public officials that acknowledged God as the sovereign source of law, liberty, or government, and provided for the impeachment of federal judges who disregarded the act.