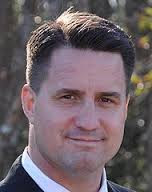 Though he didn’t get elected, Bill Connor was one of a colorful array of Tea Party candidates challenging Sen. Lindsey Graham in South Carolina’s 2014 Republican primary. He was admittedly overshadowed by Lee Bright in terms of media coverage, but Connor, an Army veteran and former lieutenant governor candidate, did receive some attention when the Tea Party Coalition arranged a lively debate between Bright, Connor and the two other Tea Party candidates, where Connor spent the whole event waving a pocket copy of the Constitution, which he has apparently never read particularly closely. During the debate Connor asserted (among other things) that the Europeans he fought alongside in Afghanistan were less hard-working and ingenious than American soldiers because “Europe had gone socialist” and “post-Christian”; that Congress should impeach President Obama over his executive order implementing part of the DREAM Act; that the separation of church and state has caused “atheism to be our national religion”; and that Congress should disband federal appeals courts that enforce church-state separation because “if you’re being biblical, you’re doing your job as a judge.”

When asked about climate change, Connor responded that it was “gobbledygook,” which he illustrated by asking everybody in the audience to take a deep breath, breath out, then telling them that “you’re putting carbon deposits in the air and you’re causing global warming.” Gobbledygook, indeed. No, he doesn’t really get the point, but neither did the other candidates (Nancy “a recent freeze disproved climate change” Mace and Richard “MLK’s ‘I Have a Dream’ speech was about banning abortion” Cash).

Diagnosis: Look, Bill: Waving a copy of the Constitution is not magically going to make the theocratic nonsense that falls out of your mouth more in line with its contents. Though we admit that Connor might just be a prop in a deliberate strategy to make Lee Bright come across as less insane than he is. It didn’t work.
Posted by G.D. at 6:20 AM