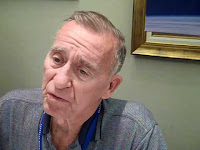 Diagnosis: Sad. Cunningham is a serious lunatic apparently determined to ruin his own legacy with nonsense. That his name carries some authority on the issue of climate change is testament to the lack of critical thinking skills among his audience, but he does, admittedly, have some influence.
Posted by G.D. at 4:13 AM