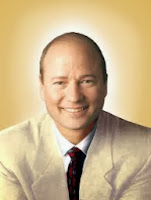 John Hagelin is the perennial presidential candidate for the absolutely crazy Natural Law Party, and a yogic flying guru. Yes, flying: “the practice of Yogic Flying creates maximum coherence [no, they don’t know what “coherence” means, and that actually explains a lot] in brain functioning and a powerful influence of coherence in society, spreading waves of harmony and peace to the surrounding population,” according to this website for “yogic flying clubs for students". In a bizarre chain of events Hagelin also sought the nomination for the ReformParty in 2000 to challenge Pat Buchanan’s hostile takeover.

In any case, Hagelin apparently started out as a serious quantum physicist until he went mad sometime in the 1980s, became a disciple of Maharishi Mahesh Yogi and a proponent of Transcendental Meditation (TM) (a good article on TM here), including yogic flying and vedic architecture (the idea that he layout and direction of a building can have positive or negative effects on its inhabitants; specifically, buildings should only face east; other directions, especially south, invites bad “energies," and can even propagate criminal behavior). He also became a “Professor of Physics” at Maharishi University of Management and “Minister of Science and Technology” of the “Blogal Country of World Peace.” His later physics publications, by the way, seems to have been published in the “Journal of Modern Science and Vedic Science”, so his physicist credentials are not impeccable, and he is known for claiming that the unified field theory and consciousness “as a field” are interrelated, without providing anything resembling evidence or explanation (he may have attempted the latter, but seriously: no, the incoherent babble that falls out of Hagelin’s mouth does not count as “explanation”).

TM fans started the Natural Law Party in 1992 with the purpose of implementing “scientific” solutions to all our societal woes, where “scientific” means Transcendental Meditation. In fact, Transcendental Meditation was proposed as the solution to absolutely every problem, including crime, budget deficits and defense. For instance, in the 1990s Hagelin offered the services of 7000 yogic flyers to create enough positive vibes to end the war in Kosovo. The party was disbanded in 2004 to become a cult devoted to Maharishi Yogi (which is what they always were anyways), but party leader John Hagelin went on to form something called the “United States Peace Government.” He is also Executive Director of the International Center for Invincible Defense, which promotes Hagelin’s solutions to war. According to the Global Good News website “on 28 November 2006, the United States achieved invincibility and is stabilizing the number of Yogic Flyers – rising from 1,600 to 1,730 – assembled at the Invincible America Assembly in Fairfield, Iowa.” They also say their program (thinking about peace very hard) has been “field tested” for 25 years and has shown clear reductions in terrorism, but they haven’t released the data.

in 1993, Hagelin brought 4,000 TM-Sidhi program practitioners to Washington, D.C., where they practiced the TM-Sidhi techniques twice daily in a group for several weeks. Hagelin obtained data from the District of Columbia Metropolitan Police Department and claimed to have shown that the energy created by the TM had significantly reduced crime. Serious researchers dismissed the study, not only as idiotic but as pure and simplefraud, but Hagelin and his coauthor, Maxwell Rainforth, Assistant Professor of Physiology and Health and Statistics at Maharishi University of Management, complained that the criticisms (i.e. the scientific misconduct complaints) were “superficial”, without attempting to explain precisely what was wrong with them. The same happened when Robert Rabinoff claimed that the “Maharishi effect” was responsible for reducing crime and accidents while simultaneously increasing crop production in the vicinity of Maharishi University in Fairfield. James Randi checked with the Fairfield Police Dept, the Iowa Dept of Agriculture, and the Dept of Motor Vehicles and found that Rabinoff’s data were invented.

Hagelin did appear in “What the Bleep Do We Know”, as one of their scientific authorities. Cracked.com counts him as one of the six most insane people to ever run for president, though that is probably incorrect (though his interview with Larry King, transcribed here: http://edition.cnn.com/TRANSCRIPTS/0205/12/lklw.00.html, makes a good case for that classification).

One Ellen Grace Jones, in an article for Huffington Post, claimed that Darwin was wrong based in part on discoveries allegedly made by John Hagelin. The reasoning is unclear. Indeed, the article must count as one of the most incoherent jumbles you will ever read.

Diagnosis: Hagelin is, in fact, a rather dangerous cult leader, and the fact that he is slightly more insane than regular cult leaders doesn’t exactly make him less disconcerting. Nor has it prevented him from having had a certain impact.
Posted by G.D. at 10:42 AM