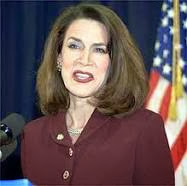 Don Harkin used to be the editor of the Idaho Observer, a famous conspiracy rag popular among the “patriot/survivalists”, but seems to have died (according to colleague(?) Jack Blood, he was apparently murdered by “NSA and associated intelligence groups who utilized extremely powerful ‘Psychotronic,’ Electronic Warfare on him.”

That leads us to the infamous Katherine Harris, former Secretary of the State of Florida and member of the United States House of Representatives from 2003-2007. Harris is perhaps most famous on a national level for her involvement in the MZM scandal, for being an absolutely insane religious fundamentalist and dominionist, and for being in charge of the 2000 recount of Florida votes that ended in G.W. Bush’s first presidency period. As expected, she is a mainstay on LVC’s list of the dozen politicians with the worst voting record on environmental issues, and has a long track record of Taliban-inspired crazy. At the Coral Ridge Presbyterian Church's “Reclaiming America for Christ” conference she – as a true fan of David Barton – urged her followers to “win back America for God,” to reject “that lie we have been told, the separation of church and state,” that “if people aren’t involved in helping godly men in getting elected, then we’re going to have a nation of secular laws. That is not what our founding fathers intended and that’s certainly isn’t what God intended,” and that non-Christian voters are morally contemptible (just look at their support of gay marriage, which, of course, is something Harris finds utterly appalling and which she has rallied against together with plenty of the usual suspects). When asked to clarify her views, she dimly realized that although she meant every word of it, she didn’t intend for it to be picked out by outsiders, though she repeated that “I think that our laws, I mean, I look at how the law originated, even from Moses, the Ten Commandments. And I don’t believe that uh … That’s how all our laws originated in the United States, period. I think that’s the basis of our rule of law.” Later she repeated her call for eliminating the separation of church and state.

At least she is completely confident that she’ll go to heaven, despite being morally contemptible (though she is, of course, not aware of that).

Fortunately, she lost the 2006 elections after having declared herself the winner in straw polls she organized herself. The 2006 race was itself a source of much hilarity; after Harris failed to win the backing of the Republicans she went into complete loonyland denial mode and promptly lost all her campaign managers because of intolerable working conditions.

Diagnosis: For a while Harris was one of the truly most inane forces of stupid-driven hatred and denialism in the US. She seems, at present, to be relatively neutralized, but she still deserves an entry in our Encyclopedia.