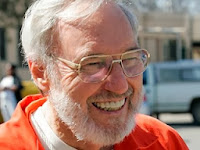 The House of Yahweh (HOY) is a Texas-based (Abilene) religious movement (cult) founded by pastor Yisrayl Hawkins, a former member of the Worldwide Church of God. The cult-monitoring website Religioustolerance.org classifies it as a “high risk group.” HOY’s teachings, which may perhaps be classified as a branch of Judaism, are heavily influenced by the fanatic delusions of Herbert Armstrong (indeed, HOY was originally a splinter group of Armstrong’s sect). As such, they are among the cults awaiting the imminent return of … well, the end of the world at least, but apart from that things get murky. Apparently their messiah is some guy called Yahshua, the Son of Yahweh, who is apparently not divine. The names God (El, Elohim), Lord (Ba’al, Adonai), Jehovah, Jesus and Christ, however, are apparently are names or titles of pagan beings or idols, or are mistakes, that have been falsely ascribed to Yahweh. Apparently The House of Yahweh Sanctuary in Clyde, Texas, is their Mecca, the only place on Earth where celebratory feasts are to be observed, and the cult’s members are supposed to make pilgrimage to Abile three times a year.

Yisrayl Hawkins (earlier “Buffalo Bill” Hawkins) founded the HOY (story here) after his brother J. G. (Yaaqob) Hawkins returned from a seven-year visit to Israel claiming to have “found proof of Yahweh’s name.” Hawkins claims that he and his brother were prophesied in both the Old and New Testaments as the Two Witnesses sent by Yahweh to prepare the world for the Second Coming of Yahshua, but doesn’ really back it up. But, well, you know. Hawkins has at least written numerous books concerning Yahweh’s Laws and Prophecies – you can probably guess your way to the main gist – as well as HOY’s own Bible translations, which takes out the parts Hawkins doesn’t fancy (though since he is crazy the parts he doesn’t fancy may be different from the one’s you’d expect). He has also promoted the building of the third Jewish Temple in Jerusalem, but has as of yet not made any significant headway on that score.

At least he has already tried his hand at predicting the end of the world. In 1999 he predicted that “four fifths of the world’s population is going to be wiped out between now and about the middle of the year 2002. […] There is no possibility that it could not take place just as I have told you.” The prediction seems to have caused some stir-ups in Kenya, at least. In 2006 he announced that nuclear war would start September 12, 2006 (Abilene would be saved). In 2007, he amended the prediction (duh) to June 12, 2007. The most recent suggestion was June 12, 2008. He doesn’t seem to have made any comments on the affair since.