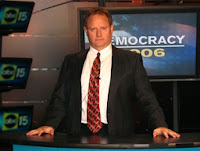 Honorable mention to Dean Hamer, who gives genetics a mildly bad name, and the late archfundie Don Hamer, whose name doesn’t really justify anything but forgetting. Ernest Hancock is a radio host, candidate for Chairman of the Libertarian Party of the United States and a rabid conspiracy theorist, whose inecessant rantings about the New World Order has generated some controversy within the party. Hancock has given voice to the idea that the U.S. government had prior knowledge of the Oklahoma City bombing, that Timothy McVeigh worked on CIA “black operations”, and that the bombing was part of a government plan to “demonize critics of world government.” (Hancock seems to help said demonizers much more effectively than their own strategy – maybe his fellow conspiracy theorists should take notice?) He is furthermore known to be worried about the use of “implantable brain chips”, being a guest on Alex Jones, and perhaps most importantly, as a staunch 9/11 truther.

His radio assistant, Jet Lacey, actually appears to be even crazier, as evidenced by his explanation of “the Global Warming/Climate Change hoax and how it creates the New World Order and how it is based in negative eugenics.” (no link)

Diagnosis: A fine example of the delusionally paranoid faction of the libertarian movement. Hancock’s impact, however, is probably limited (quite contrary to his own beliefs about his impact).
Posted by G.D. at 9:23 AM