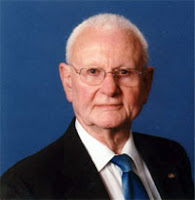 Jim Ammerman, who used to be an Army Colonel, is the founder of the Chaplaincy of Full Gospel Churches (CFGC), which provides the official endorsements for 270 chaplains and chaplain candidates in the U.S. military. Among its members is the disgraced batshit crazy bigoted nutjob Gordon Klingenschmitt, who is still endorsed by the CFGC. That tells you something about the organization.

Among Ammerman’s more charming claims is the one that a Muslim cannot be a good American and that Muslims should all be considered suspect. The reason is that “[he] cannot accept the American Constitution since it is based on Biblical principles and he believes the Bible to be corrupt.” (A comment worthy of Bryan Fischer). Ammerman is also a firm believer in the idea that there is a Jewish conspiracy to control the world, and his take on the theory has all the elements associated with it over at whale.to: the Illuminati, the Bilderbergers, the Rothschilds, the Rockefellers, and Satanists. Apparently everything from 9-11 being a government conspiracy, to the United States being in imminent danger of being placed under the control of U.N. forces, to the entire U.S. government being an illegal government founded by the Illuminati and the Satanists (more here). Particularly notable, perhaps, is his claim that Hillary Clinton is “higher up” in the Illuminati than Bill, so he is the one who must take orders from here – which comes in addition to the fact that Ammerman thinks Clinton should have been publicly executed (video here). In 2006 he also suggested that the four democratic senators who were then candidates for president (Clinton, Biden, Dodd, and, of course, Barack Obama) should be arrested and executed for voting against making English the official language of the United States.

Ammerman’s day job, however, is still to teach chaplains to serve in the military.

He’s also a fan of imprecatory prayer, particularly against people who fight for religious freedom in the military. When he’s not calling upon God to kill Mikey Weinstein (founder of the Military Religious Freedom Foundation) and his children, Ammerman’s favorite pastime is to proclaim total falsities and make up conspiracy theories around him (also discussed here).

Among other members of the CFGC we find the infallibly wrong James Linzey, who will be covered later, and one CH Lamb, who is behind this one.

Diagnosis: Words fail. Ammerman needs help, love, and care, but one suspects that such therapy wouldn’t be quite sufficient. He should at the very least not be endorsed by any official power or have any influence over anything related to the military, or anything else, but he seems to continue to be allowed to continue to wield a certain amount of influence.

Update: When double-checking some of the information I became aware that it seems that Ammerman has passed away.
Posted by G.D. at 1:22 PM