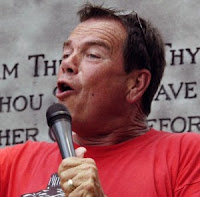 Diagnosis: The flamboyant flair of Fred Phelps, the reasoning ability of Pat Robertson, the belligerent, petty bigotry of Matt Barber and the dominionism of Gary DeMar, all rolled up into one dazzling bundle of shrieking insanity. That doesn’t prevent Benham of having a bevy of acolytes and constituting a real threat to the side of good in virtually any battle over anything.
Posted by G.D. at 12:00 PM