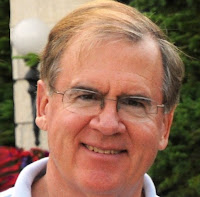 John R. Baumgardner is a geophysicist, young earth creationist, and Christian fundamentalist. So yes, he is another one of those people whom creationists rely on so heavily, since he’s got credentials (he has a PhD in geophysics from UCLA), and in fact some reputable, real science publications (not using creationism, of course).

Baumgardner’s life task is to provide scientific proof of the Deluge myth, a goal he has entertained ever since he, according to himself, turned to Christianity in his twenties.

He is famous for creating a computer program (“Terra”) to model the flood, and is a central member of RATE (and IDEA). His main schtick is the “runaway subduction model” of the flood, which relies essentially on magic: The pre-flood ocean floor sunk into the underlying mantle, which then bubbled up massive amounts of magma; virtually the entire existing ocean floor on the entire planet was formed this way in a very short period of time. Which means that 2 billion km3 worth of lava flows, at 1200 degrees C, were released below the oceans at once. The amount of heat and energy released this way (about 1028 j) would of course boil off the oceans (so much for the flood) and perhaps even the atmosphere. But, of course, Baumgardner does what creationists do in such cases: a miracle happened. It is actually rather interesting (and occasionally close to endearing) that creationists attempt to give their views this extra science-sounding ornaments; at the very foundation of the theory there is the miracle of Jesus. One would think that it would be easier and more elegant to just posit these miracles directly, without the additional scientific bells and whistles. Unless the point is deception, of course.

Baumgardner also worked with Ron Wyatt on one of Wyatt’s attempts to find the Ark, though to Baumgardner’s credit he did not accept Wyatt’s claims that the rock formations they found were actual remnants of the Ark. It is not obviously to his credit that he accepts global warming: “Yes, global temperatures are rising […], but […] it’s because Earth has been warming slowly but surely ever since Noah's Flood 5,000 years ago,” according to WorldNetDaily, who apparently thought Baumgardner’s delusional ravings were worth writing up in an article.

Canadian creationist David Buckna is apparently a fan, and his JAQing off, without a shred of concern that his points get thoroughly debunked, constitute an almost wonderful version of the Gish gallop. To underline the insanity of flood geology, the garbled unhingedness of the rants of Kelly Hollowell are illustrative as well.

Diagnosis: A sad case of a probably intelligent person who failed to distinguish science from its cargo cult incarnation. Baumgardner is happily continuing a long tradition of medieval theosophistry when applying his background to provide heavyweight answers to deep questions such as calculating the numbers of animals that could be on the Ark or how many angels can dance on the head of a pin.
Posted by G.D. at 11:52 AM