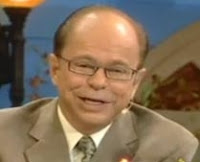 “Jim Bakker spelled his name with two Ks because three would be too obvious.” (Jeff Stilson)

Jim Bakker is the formerly disgraced (yes, formerly disgraced) televangelist who at one point ran the PTL club, a network of televangelists, with his wife Tammy Faye Bakker (later Messner). He was pretty successful once, even creating an amusement park in South Carolina. As opposed to most such people, Bakker even kept rightwing politics off the show, but he did ardently promote the prosperity gospel and the idea that Jesus wants you to be rich.

His success lasted until John Ankerberg and Jimmy Swaggart exposed his tendencies to commit adultery, after which his empire crumbled (Swaggart himself was caught soliciting services from a prostitute a little later), after which Jerry Falwell swindled PTL off his hands and got Bakker sent off to jail for some fishy financial transactions. Bakker then waited a few years, wrote a book “I was wrong”, and then returned to preaching, apparently relinquishing the prosperity gospel. Fuller story here.

So did he come to grips with sanity and reality, then? Not a chance.

In his most recent book, “Big Book of History”, Bakker argues that the courts and President Barack Obama “kicked God out of schools and eventually […] out of the entire nation.” The liberal war on God started, of course, with the mandatory school prayers being found unconstitutional in 1962, and America has declined since then. Liberal politics and secular society turns kids morally depraved, and “rebellious children [apparently, Bakker thinks that’s a new phenomenon] are a sign of the Last Days”). The church hasn’t done enough to stop this, and as a consequence “[a]n anti-christ spirit is masquerading in our world as a champion of human rights.” He also claims to have prophesied 9/11 (Rick Joyner agrees that Bakker foresaw it, by the way).

As most dimwits of his type Bakker has of course warned that “America is under curse”, and claimed that God let his protective hand of protection down to allow the September 11 attacks to occur in order “to get your and my attention.” Which means, of course, since he doesn’t want God to be the bad guy, that Bakker thinks 9/11 was a good thing. But religious fanatics often get away with double standards.

More recently he has tried to bolster his career as a meteorological prophet, bravely giving prophecies of earthquakes along fault lines and hurricanes and floods in New Orleans. When some of his shows was recorded during inclement weather, Bakker took the thunder that could be heard booming several times over the episodes to be proof that God was approving of the stupid shit he and his guest (Rick Joyner) was saying, such as the need to support Bakker’s ministry through donations and the importance of supporting Israel. Some might have thought that rolling thunder would suggest disapproval, but Bakker has a direct line to God that the rest of don’t.

Diagnosis: Depraved Taliban dominionist. His influence seems far less widespread than it used to be, but he’s still got some danger in him.
Posted by G.D. at 1:55 PM