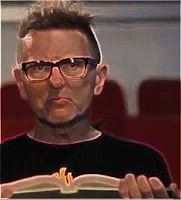 Michael Belkin is a financial forecaster-turned-musician, and The Refusers is his band. Belkin lost his daughter in 1998 hours after receiving a required vaccine, which is, of course, a horrible tragedy – and no one should expect that a person experiencing a tragedy like this should have only rational immediate reactions. But Belkin is unfortunately using his tragic experience to fight against the welfare of other people as well, and though understandable it is in no way justifiable.

He is currently using his music for anti-vaxx purposes (he has also provided testimony before Congress, despite the fact that he has no expertise on the matter, but you sort of see why his anecdotal evidence might carry some weight even though it shouldn’t). The Refusers are in any case a “musical tribute to the victims (past, present and future) of the government's misguided mandatory vaccination policy”. The lyrics discusses vaccine issues and government-mandated intrusion into our personal lives (i.e. conspiracy theories), and the songs carry titles such as “They can keep their flu vaccine” and “Vaccine Gestapo” (“They're a medical military priesthood; Just like Adolf they preach the greater good”). It is somewhat hard to determine from the lyrics whether it’s a Poe, but apparently it isn’t. Discussed here.

Apparently they are still active, predictably going further and further into tinfoil hat conspiracy land for each appearance. It is hence interesting that lots of antivaxxers accept them as the soundtrack for their denialism. But then. the antivaxxers left science behind a long time ago.

Michael Belkin also has a substantial whale.to presence, promoting the pharma shill gambit, conspiracy theories and the claim that pediatricians are brainwashed (which he apparently thinks is staggering – maybe he should start to entertain the notion that he, Belkin, may be wrong?) – it is all ad hominem reasoning, of course; no actual evidence or science is discussed, just attempts to explain why all the scientists are wrong since they disagree with him, and not even bothering to try to establish that they are, in fact, wrong. Indeed, he is known to assert that everyone who disagrees with him must be lying (hilariously, in this interview with the well-known conspiracy rag WorldNetDaily you can sort of see Belkin trying to dodge some of the most lunatic implications from his interviewer, the obviously garbledly unhinged Geoff Metcalf).

Diagnosis: A tragic case, really, but Belkin is undeniably loony and a moderate threat to civilization and humanity
Posted by G.D. at 2:43 PM