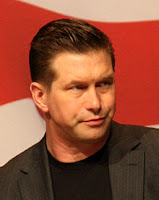 Stephen Baldwin is the youngest of the Baldwin brothers, and most famous for his appearance in The Usual Suspects, evangelical Christianity and proselytizing (especially among the enlisted), political activism (especially for his campaigns against adult bookstores) and for having a tattoo on his left shoulder of the initials “HM” for Hannah Montana.

He has also been (of course) in financial trouble, and since 2009, a website has been soliciting donations on Baldwin's behalf, stating that “because of this convictions [sic] it has caused him the loss of many jobs,” and that “he deserves hundreds of millions for his Job-like faithfulness in the face of relentless loss and persecution.” Baldwin seems not himself to be involved in that site, but he is behind the for-profit organization Antioch Ministry, which exists “to facilitate the gifts and calling of Stephen Baldwin”.

He’s not a fan of evolution, and this video may suggests something of the addled shallowness of Baldwin’s intellect. In his memoir “The Unusual Suspect” he “argues” that free will is a lie of Satan (no, he doesn’t engage with Harry Frankfurt), and campaigns against the threat of intellectualism  – we must shut off our brains, Baldwin says, and be led by what God tells our hearts. Furthermore, efforts to end global poverty and violence are just the sort of “stupid arrogance” that incur God's wrath, which we'll be feeling any day now in the coming apocalypse. In other words, it’s a long rant trying to justify his egoism and for viewing his own ignorance as a virtue. More here. This one is illuminating as well.

He is nevertheless not to be confused with Steve Baldwin, the executive director of the Council for National Policy, even though they share characteristics beyond a common name (evidence here).

Diagnosis: Prominent evangelical preachers and creationists, despite their willful lack of knowledge and understanding, at least tend to display a certain slick cleverness. It is interesting to see what happens when you take even the trappings of a working mind away and get Stephen Baldwin.

Addendum: Although generally considered the least crazy of the Baldwin brothers, Alec Baldwin has given his name to the pseudoscientific Tooth Fairy Project. Honorable mention, then.
Posted by G.D. at 12:57 PM