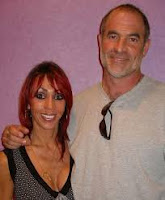 Debby & Mark Constantino are a husband-and-wife paranormal research team based in Northern Nevada who also runs the website spirits-speak.com. It is, in fact, a bit unclear to what extent they actually believe that they are uncovering paranormal phenomena – the website is very much consistent with a joke – but at least they claim to be specializing in Electric Voice Phenomena, which they believe is not only a means to achieve closure with the dead, but that it can aid police in crime solving (by boosting confirmation bias, though the Constantinos don’t put it that way). They also work with “haunted items,” and Debby “has the gift of attracting spirits […] she also feels she vibrates on a level to glimpse into the nature realm [no idea].”

Together they lecture at paranormal conferences about EVP stuff, though when you look at the flyers for those events you wonder whether it’s all intended as a joke – and the homepage of Zak Bagans, for instance, doesn’t exactly scream “I take this stuff very seriously”). They also participate in live ghost hunts, and have appeared on “Dead Famous, “Paranormal State” and “Ghost Adventures”.

Diagnosis: Since their whole thing is as tacky as a Key West guided ghost tour, one presumes that the whole thing is a scam to get visitors to buy merchandise (which you can). Otherwise …
Posted by G.D. at 9:38 AM