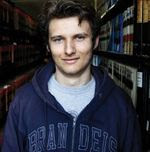 Groomed as the Wonder Boy of the Age of Autism blog network (yes, Jenny McCarthy, J.B. Handley and the rest), Jake Crosby is, as you’d expect, a hardcore anti-vaccinationist and denialist, as well as a denialist about his own denialism – Crosby denies that he is anti-vaccine. He just thinks vaccines cause autism and that there is a conspiracy to hide this fact, and that vaccines should probably be avoided, which he asserts is not the same thing as denialism.

Crosby’s favorite gambit is the Big Pharma shill by association; everyone who disagrees with him is obviously part of a conspiracy (involving Big Pharma, the CDC or the FDA) – and anyone who knows anyone with a connection to those institutions is automatically wrong, regardless of what evidence, science, data, observation, reason or reality says. They also persecute him (though the most notable part in that last link is Ginger Taylor’s absolutely astonishing comment), so that’s why he is justified in trying to get his critics silenced or fired. Another popular claim of Crosby’s, that Dr. David Lewis (not that David Lewis) exonerated AndrewWakefield and his fraudulent research, is rebutted here.

A third technique popular with Jake Crosby is slaughtering strawmen. When this technique is combined with conspiracy theories and general ignorance, the results can often be rather staggering. Then, of course, Crosby dons his tinfoil hat and connects HIV with the polio vaccine used in Africa 50 years ago (irrevocably refuted); the purpose being of course to avoid engaging with any real science and real ethical concerns in his crusade against vaccines.

Crosby has even reached whale.to, though I won’t link to it (search for it yourself if you need to) for his marvelous conspiracy theories developed in order to discredit the idea that autism rates have not risen the last couple of decades (e.g. here) – primarily, and as expected, through a guilt by association claim. It is really a perfect game – anyone who has done research on the topic is by that very fact biased and their research must therefore be disregarded (unless it agrees with the conclusion Crosby has already convinced himself is correct). After all, given the always existing possible appeals to conspiracies, no amount of science would convince Crosby that vaccines don’t cause autism, something he has pretty much admitted himself (along with – you guessed it – conspiracy theories and ad hominem arguments (real ad hominem fallacies; that is, such as dismissing scientific studies he doesn’t like by name calling without identifying any flaws in them); also discussed here).

The Crosby story has recently taken a fascinating turn, however. Brought up as he was with persecution complexes and pseudoscience, it may come as little surprise that the fledgling conspiracy theorist has turned on his own masters and found a new outlet on the Bolen Report, where he has published various conversations and email exchanges with other luminaries of the antivaxx movement. Why this turn of events? Well, apparently his former masters just aren’t sufficiently conspiracy minded for Crosby anymore, and – having realized where Crosby was going – they didn’t let him testify before Congress during Dan Burton’s last antivaxx hearing (SafeMinds’ Communications Committee Chair, Kate Weisman, even suggested that Crosby “walk the halls”). SafeMinds’ response to Crosby’s allegations is actually pretty hilarious and feeble (as it had to be, given that Crosby was using precisely the types of arguments against SafeMinds that SafeMinds is using to dismiss science). The ensuing war is covered in three parts here; here; and here. The development didn’t prevent him from appearing at the annual quackfest AutismOne 2013 to teach you how to become a more effective advocate for pseudoscience and denialism; there is a report concerning his scheduled session here (though it is said that he subsequently boycotted the event, presumably not because he had a flash of reason).

Diagnosis: As Age of Autism’s resident conspiracy theorist Crosby was actually not without detrimental influence on civilization. Recent developments seem to have blunted his impact a little as he has deteriorated to his true position as a resident of the whale.to segment, but I won’t write him off quite yet.