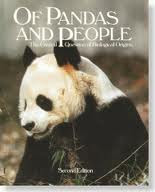 Percival Davis is an author, young earth creationist, and proponent of teaching intelligent design in public education (since young earth creationism, what he really believes, won’t fly). Davis does indeed have a master of arts in zoology from Columbia, and is also a visiting professor of biology at Clearwater Christian College (which strongly suggests that this ain’t a place to go for an education), but is hardly a legitimate authority on biology.

In fact, Davis is – together with Dean Kenyon (to be covered) – responsible for popularizing the term “intelligent design,” particularly through writing the infamous ID creationist textbook Of Pandas and People, which presented intelligent design in a manner the creationists (after McLean v. Arkansas Board of Education) deemed suitable for school kids for legal purposes – in other words, Davis is another prime example of the creationist agenda of trying to convert kids instead of actually doing science to support their silly ideas. “Of Pandas and People” was of course the book that subsequently formed the backdrop for the Dover Trial, for those who are unfamiliar with the details of ID propagation.

The book suggested that Darwinism had outlived its usefulness, primarily because of irreducible complexity, which the authors took as good evidence for the unfalsifiable and hence unverifiable theory that an intelligent designer was behind it all. And yes, it contained all the standard creationist fallacies, PRATTs, quote-mining, and Gish gallops in the book; and yes, it is only about objecting to evolution – no positive case is made for ID, and the authors seem to assume that if evolution fails, creationism must be right, which is quite simply a mistake. It is reviewed here. Concerning the obvious agenda behind the book, Davis commented “Of course my motives were religious. There's no question about it.” Here is a selection from the Dover ruling showing what role Of Pandas and People was really supposed to play. You can read how the ID crowd reacted here.

Davis has also co-written Case for Creation (with Wayne Frair, also to be covered in the relatively near future).

Diagnosis: One of the stalwarts of the utterly dishonest insanity movement that is the Intelligent Design movement, and a complete fucking moron. Dangerous.
Posted by G.D. at 5:44 AM