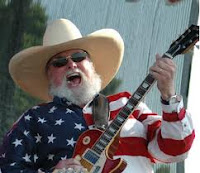 Ted Nugent is not alone. Indeed, Charlie Daniels has in many ways had an even more impressive career as a musician, and he promotes the same kind of inane wingnuttery, bigotry and denialism. Daniels’s views of life and politics, in all their erudition, are detailed for instance in his 2003 Open Letter to the Hollywood Bunch in defense of President George W. Bush’s Iraq policy against many other artists and celebrities, and his book (same year) Ain’t No Rag: Freedom, Family, and the Flag, which espouses more or less precisely the kinds of views, bigotry and fallacious reasoning you would expect from a book of that title. Around the same time, during the 2004 presidential election campaigns, Daniels was also a staunch promoter of the Swift Boat Veterans for Truth manufactroversy strategy against John Kerry (the 2004 counterpart to birtherism).

Daniels is of course also a creationist, having predicted – on the basis of his expertise in the field – that “[i]n the future Darwinism will be looked upon as we now look upon the flat earth theory.” To elaborate: “Darwin’s theory is just that, an unproven idea written by a very fallible human being. Now I don’t expect these learned scholars to give any credence to what someone like me says [oh, how humble of you], but now there are imminent [sic] scientists who say that Darwin’s Theory of Evolution is fatally flawed and should not be taught in our schools as fact [no names provided]. This world was created by Almighty God and no amount of theories or college professors can change that fact [damn all you elitists who know stuff]. The truth of the matter is that evolution cannot be proven. It never has and it never will because you can’t prove a lie.” Good to hear it from an ol’ common sense Southern guy whose musicianship has awarded him with great scientific insights. In 2008 Daniels was also nominated for a Creamy Baileys Nobel Peace Prize for Science for his work on global warming, which Daniels dismissed as “a yankee conspiracy.”

The WND, being predictably interested in Daniels’s informed opinions on matters politics and science, could report his characteristic positions on society and politics as “[t]here’s a move afoot to change life in America into a totally European – I’ve heard that so much I’m getting sick of it: ‘European’ – socialist thing; but it’s the dag-blamed truth [sic], and it don’t work, it never has worked, and if America goes that way, America will never be America again.” There is a certain disconnect between the strands in that observation, but Daniels or the WND would of course never notice.

Diagnosis: Stupid and proud of it, and standard denialist, but Daniels does admittedly have a way of rejecting truth that is intermittently fascinating.
Posted by G.D. at 8:50 AM