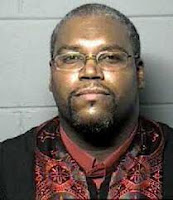 Donald Crosby (not the philosopher of religion) is a colorful local pastor in the town of Warner Robins, Georgia. He is most famous for getting himself arrested for protesting (disorderly conduct and “excessive noise”) the fact that the local school's mascot is the Demons (in honor of a WWII squadron), saying that the school's demon logo just encourages children to evil: “I don't scare easily. Lock me up as many times as you have to lock me up. Even kill me if you have to. I'm standing up for Jesus.” Now, in all fairness he was arrested on dubious grounds – but there is little doubt that he would benefit from a little help and friendly attention. Apparently he angrily criticized other Christians who, he says, are singing in church while their children are being taught to praise demons: “Demons aren't lazy, Christians are,” he howled, and asserted that the city of Warner Robins must repent for its praising of demons. More here. As for the WWII squadron thing, Crosby responded “A demon never has a good connotation. Never. If you look it up in Webster’s Dictionary, there’s nothing good about a demon.” So that settles it, then.

Diagnosis: Insofar as his immediate surroundings also perceive him as a loon his efforts may be described as harmless and charming; his potential harmful effects would be to draw attention away from the equally bizarre and insidious views held by less overly brash and noisy individuals in positions of more power.