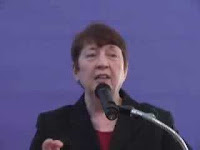 Constance Cumbey is a legend among conspiracy theorists, but most famous, perhaps, for having repeatedly accused Texe Marrs and Pat Robertson of stealing from her. In 1983 Cumbey, then a lawyer, published the classic The Hidden Dangers of the Rainbow: The New Age Movement and Our Coming Age of Barbarism, which pretty much launched the Taliban fundie scare of New Age bullshit, and simultaneously lost Cumbey all possible shreds of academic credibility due to its promotion of several marvelously incoherently insane conspiracy theories.

The main feature of the book is the attempt to blame the New Age movement on Benjamin Creme, theosophy, and Nazism, and attempting to portray said movement as an insidious (correct), highly organized (hardly) and unified conspiracy to overthrow the US and replace it with a Nazi regime. The New Age cult’s alleged tenets are ecumenism, holistic health, New Thought, humanistic psychology, Montessori schools, modernism, secular humanism, and zero population growth, and any advocate for any of these is obviously a member of a hierarchically organized cult. Unitarian churches and health food stores are the “New Age recruiting centers,” the Guardian Angels is the New Age movement’s paramilitary organization, and “the New Age Movement has complete identity with the programs of Hitler.” Indeed. (She has a blog where she expands on these issues, but I am not inclined to link to it.)

The prophets are Creme and Alice Bailey, who according to Cumbey founded New Age while awaiting the new “messiah” named Maitreya. Hence, all secular humanists are secretly awaiting Maitreya. According to Cumbey Maitreya is most likely the Antichrist. Others believe Maitreya is an imaginary piece of fluff nurtured in the largely incoherent minds of Benjamin Creme and others of his ilk, but Cumbey doesn’t really have the mental capacity to recognize that people can have false beliefs – New Age beliefs, for instance, aren’t really false on Cumbey’s view; instead they usher in Satan.

Some (random) examples of people who have been inspired by Cumbey and her identification of Maitreya and the Antichrist are
- one Harry Walther, who identifies the Antichrist/Maitreya here (not recommended; the color and font schemes are rather uncomfortable for eyes and mind).
- One Jeffrey K. Radt, who weighs in here.
- Another one.
- Some people engaged in this rather … disturbing discussion (hey, it’s from Rense.com – what did you expect).

Cumbey has also claimed that the rainbow sticker (for gay rights) was a secret identifier used by New Agers to identify each other. Here’s Cumbey on other religions than her own:

“While there are certain superficial similarities among most religions, orthodox Judaism and Christianity stand in direct opposition to every other belief system. It is safe to say, however, that nearly all non-Judeo-Christian religions are extremely similar because, as the Bible indicates, they come from one source, the ‘god of this world’ – Satan himself.”

Diagnosis: Wailingly insane. She seems to have had a substantial impact on the reason-challenged parts of the fundie universe, though it is unclear whether her lasting influence is detrimental or actually sufficiently self-defeating to end up being overall positive.
Posted by G.D. at 7:06 AM