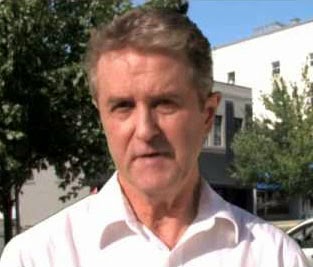 If you are looking for the most horrible person in the US at present, Ted Pike is running a pretty strong candidacy. Pike is a reverend of some sort who tends to write articles for his National Prayer Network website as well as letters to Senators and Congress member and posts encouraging others to do the same – he has also appeared on Jeff Rense’s radio program to promote his views.

So what’s he up to? Well, in addition to being a fundie, Pike is also an anti-semite, toys with white supremacism, and a holocaust denier who believes that Auschwitz never existed. As a result, Pike is ardently and tirelessly fighting evil Jewish groups such as the ACLU, the Southern Poverty Law Center, and the Military Religious Freedom Foundation, organizations he feels are spearheading a movement to suppress freedom of speech (especially that of Christians), and any piece of anti-hate legislation.

But according to Pike the insidious influence is everywhere. For instance, according to Pike, “evolution is a Jewish conspiracy” that “ jewish supremacists use” to “corrupt mankind”. Apparently evolution is virtually the same as Marxism (Pike is not a man for the finer distinctions), and “the Jewish-dominated media and educational establishment are determined that, like unconditional support of Israel, Holocaust mythology, hate laws, and ‘civil rights’ favoritism, there will be no end to the relentless force-feeding of evolution. Belief in evolution is a prerequisite for Jewish supremacism’s new-world order. […] evolution is the largest, ugliest, most aggressive tentacle of the Jewish revolutionary octopus,” and it is a “Luciferian, dehumanizing fable ever invented by pseudo-science,” which, according to Pike, is currently being opposed by an army of real scientists. He doesn’t provide any references.

But evolution isn’t the only means employed by the nefarious powers that be. According to Pike the “Da Vinci Code is an unprecedented attack on Christianity and Jesus Christ. But most people don’t know that the media giants orchestrating this attack are Jewish.” Indeed. You can also read about his article “Pedophilia: The Talmud’s Dirty Secret” here.

Apparently Jewish, Satanic forces are actively opposing him, and he has been under intense demonic attack from Cabalist Jews for decades for opposing the satanic New World Order. They even possessed his wife: “The demons [possessing her] willingly volunteered their names through Alynn's voice: Pitcaw, E-yong, Shit, Contention, It-kid-eva, Oink, etc. It became clear as the years went on that Pitcaw, who told Alynn he was her ‘private demon’, seemed to have been stationed in our house while most of the rest went on to other deviltry.” Henry Makow believes his stories because Pike “is clearly rational and sane.”

Recruitement among the college-age community to Pike’s cause is taken care of by his niece Harmony Grant, who maintains the blog “For His Name’s Sake,” on which she “strives to … generate resistance to humanist/Zionist ideas and legislation.” Her articles have also appeared on the websites of David Duke, Jeff Rense, the anti-Semitic Website Ziopedia, and in the Midnight Messenger, a newspaper edited by conspiracy theorist Des Griffin.

Diagnosis: It is hard to imagine that a human being can go more thoroughly wrong, morally and intellectually, than Ted Pike.
Posted by G.D. at 10:10 AM