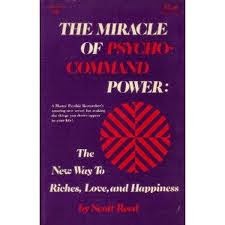 We have no idea where Scott Reed is currently located or whether he is still alive, but he used to be a force on the fringes of the self-help movement. Indeed, his 1972 book The Miracle of Psycho-Command Power was central in the early promotion of the Law of Attraction, though otherwise apparently a poorly thought out ripoff of Psycho-Cybernetics and Think and Grow Rich, augmented with pseudoscientific information on handwriting analysis. The book taught you for instance how to hypnotize lovers, control their actions with your magic gaze, and cast spells, but these abilities seem not to have become particularly widespread despite the apparent success of Reed’s book. The book was described in Nate Gangelhoff’s You Idiot, excerpted here.

Diagnosis: Who knows, but the book is at least among the most ridiculous ever written.
Posted by G.D. at 11:57 AM