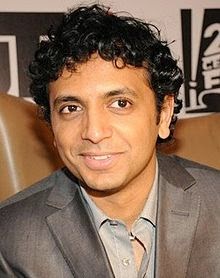 M. Night doesn’t need much introduction. In fact, it is probably pretty obvious how he qualified himself for an entry in our Encyclopedia as well. He might have successfully hid his delusions of grandeur, SPAGs and general ignorance for some time, but at least with the release of the movie “The Happening” in 2008 even his most ardent fans were sort of forced to admit not only that the movie is shit but that it is shit because Shyamalan is a loon.

The movie in question centers around a high-school biology teacher caught in an epidemy of mass suicides. The movie explains these mysterious suicides as being driven by the “spontaneous evolution” of a “toxin” in plants, and the protagonist, in a poignant turning point of the movie, gets to dismiss those so-called scientists’ ability to explain anything, since it (evolution) is all “just a theory”: “Science will come up with a reason to put in the books but in the end it’s just a theory. We fail to acknowledge forces at work beyond our understanding.” Therefore God, or at least some fluffy New Age variant of God (big-N Nature, perhaps). The grand finale of the movie consists of a monologue about the limits of rational thought delivered by a supposed scientist (and you can see Shyamalan himself try to invoke the placebo effect as proof that nature is beyond rational thought here. It’s pretty feeble.)

Of course, a film maker does whatever he wants, but given the circumstances it is hard to avoid interpreting the movie as reflecting some apparent insight Shyamalan is bent on sharing with his viewers, and that insight is absolutely moronic. The movie itself is pretty much an anti-science screed based on Shyamalan’s failure to grasp science, reason and rational thought, as well his endorsement of Intelligent Design Creationism. There is a comparison between the movie and “Expelled” here, and a discussion of what the movie reveals about Shyamalan’s attitude toward and understanding of science here.

In an interview Shyamalan also claimed to have been motivated by Einstein’s alleged religious conversion fueled by the unknowable universe, which is a myth. The movie is also thoroughly sexist. His previous flick, “Signs”, is arguably little better.


Diagnosis: Choprawoo combined with Intelligent Design is not a great combo, and after “Unbreakable” (at least) Shyamalan has been unable to keep his crazy delusions out of his movies.

Honorable mention to Ridley Scott as well for the abysmally moronic “Prometheus”.
Posted by G.D. at 10:25 AM