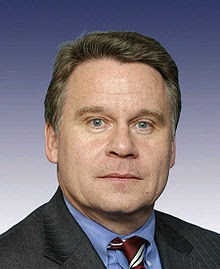 Christopher Henry “Chris” Smith is the U.S. Representative for New Jersey’s 4th congressional district, and has been in that game since 1981. That’s a lot of time to do a lot of damage, and Smith has been pretty busy about it. Now, in fairness, Smith does appear to have made some efforts to help protect women who are victims of rape, sexual assault, and domestic violence, though one might very well wonder even about these contributions given his difficulties in understanding “rape”, his attempts to get women who hadn’t been “forcibly” (what Todd Akin would call “legitimately”) raped to pay for abortions out of their own pockets, and his suggestion that all sexual assult survivors undergo investigations by the IRS.

He is, though, very much opposed to abortion, and has called Obama the “abortion president” for appointing “radically pro-abortion” people to the government, people who are promoting “evil” with an “anti-child, anti-woman mentality.” (Yes, he seems to think that keeping abortions legal is “anti-woman”). He has even endorsed some rather ridiculous conspiracy theories about “hidden abortion mandates” in Obamacare.

Apart from that, Smith was, together with Trent Franks, adamant that the US should ally themselves with fundamentalist Islamist countries to oppose United Nations’ recognitions of LGBT rights. And even within the US he maintains some scary ties to dominionist terrorist organizations.

Smith has also been among the staunchest supporters on giving federal grants to religious and other groups on the grounds that their moral outlook fits with his own. For instance, he supports grants to religious-based work promoting sexual abstinence in Africa, all the while complaining that the administration might wrongly be supporting some nonprofit groups that are pro-prostitution, pro-abortion and not committed enough to abstinence priorities – indeed, the “sexual health analyst” for his ally Focus on the Family, Linda Klepacki, said that “even some religious groups emphasize condoms over abstinence” in the fight against AIDS. And Chris Smith cannot have that!

Diagnosis: Fundie extremist. Smith is not the loudest or most flamboyantly batshit representative in Congress, but he is a hardcore supporter of evil and highly dangerous.
Posted by G.D. at 10:35 AM