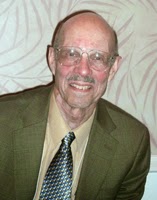 R. Leo Sprinkle is a psychologist, and was once a professor at the University of Wyoming. In the 1960s, however, he became involved in the field of supposed alien abduction. Of course, that is a field that should be of interest to a psychologist, but probably not in the way Sprinkle studied it. To make a long story short, his magnum opus, his book Soul Samples: Personal Exploration in Reincarnation and UFO Experiences from 1999 was not published by an academic publisher. Coast to Coast AM, on the other hand, has been very interested in his “research”.

To get a feel for where Sprinkle is coming from, there is an interview here. Given the questionable level of coherence it is hard to get a good grasp of what Sprinkle’s views actually are, but at least he tends “to think the Star Visitors are engaged in some type of educational program for helping us to evolve inwardly or spiritually.” He also thinks that “The Star Visitors are on a different plane.” That is his explanation for why many people claim to see UFOs when no one else in their immediate surroundings see anything – the witnesses are located at a higher plane of consciousness. That is not, shall we say, the explanation that cold science would assign the highest credence in such cases. (The experiences also have symbolic meaning and help the experiencer predict the future, it seems, which suggests that Sprinkle struggles with avoiding some basic category mistakes.) The contactees also develop psychic abilities: “Many people who have had UFO experiences have been able to visualize weather changes and have them occur very quickly. They can create rain merely by visualizing the rain.”

Sprinkle also worked closely with well-known alien abductee Stan Romanek, whom he hypnotized to retrieve lost memories of the latter’s supposed abductions, which is not a very reliable method for investigating these kinds of things, to put it very, very mildly.

Diagnosis: Ultracrackpot. The lesson is that if your investigations point to conclusions that violate everything established by other scientists, that is not evidence that you just possess more powerful faculties of perception or intuition and that you are some kind of prophet. It means that you are a crank.
Posted by G.D. at 12:21 PM