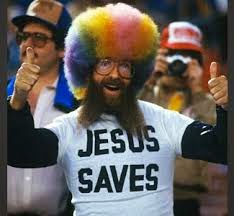 Rockin’ Rollen Stewart is the born again Christian who achieved some fame for going to virtually every sporting event imaginable in the 80s with a John 3:16 sign, strategically positioning himself to be picked up by the TV cameras. In that regard he, his sign and his rainbow colored wig managed to become something of a fixture in televised sports events (the TV cameramen apparently considered him a pest, though.) He also inspired a lot of copycats.

Convinced the rapture would take place September 28, 1992, Stewart began writing apocalyptic letters to and a series of stink bomb attacks at newspapers, bookstores, and even a few televangelist ministries to call attention to his prophecy. Since nobody would listen, he ended up taking hostages at a California hotel and threatened to shoot down passenger jets departing nearby LA International Airport unless he got three hours of free TV time. The outcome was life in prison.

Diagnosis: Colorful fellow who turned out to be less harmless than most people believed. Neutralized, but worth mentioning in an Encyclopedia like this (especially since even we are prone to dismiss people like him as harmless).
Posted by G.D. at 10:56 AM