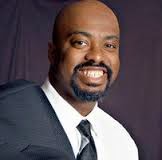 Stacy Swimp is a an aggressively anti-gay fundie minister from Michigan and founder of “Revive Alive, Flint, Michigan.” Like other fundie anti-gay activists, Swimp likes to say incredibly stupid things, and appears to believe that he’s fighting for “religious freedom” (no, he hasn’t thought very seriously about it). “We need to make sure that we are doing everything we can to stop them from amending our civil rights bill to include this civil rights language, or my friends, freedom as we know it will no longer exist,” says Swimp. I think the emphasis is on freedom as we know it; that is, Swimp’s freedom to impose his views on others and be allowed to discriminate based on his hatred and bigotry under the guise of religion. He didn’t react very coherently to the Michigan marriage ruling either, claiming for instance that it ruled marriage “unconstitutional”, and joining Roland A. Caldwell and Lennel Caldwell in arguing that civil rights should not be upheld by the courts if it conflicts with the opinions of the majority (no, they aren’t very good at thinking). Also, the bill “legalizes pedophilia”, added Swimp, just in case you didn’t know, which you probably didn't.

To make sure he has inanity well covered, Swimp also claims that gay marriage – “enemies of God” are behind it – is going to bring about the end times, just like in Noah’s day. Also, gay marriage will lead to “broken families” and “escalated crime,” and homosexuality is “bondage” that “leads to destruction and death”. He doesn’t elaborate on what he thought the causal mechanisms might be, or the data gathering process that led him to draw this conclusion.

Diagnosis: It is kind of sad that people like Swimp are currently leading the fight against civil rights, but at least he makes sure that he backs up his campaign with the stupidest possible arguments. Ridiculous clod.
Posted by G.D. at 12:41 PM