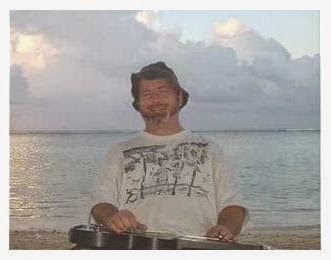 It is refreshing to see characters that still manage to impress after all these loons. David J. Stewart is one such. Stewart, a resident of Guam, has apparently decided that Jack Chick is too lenient on non-believers and not sufficiently fundamentalist (and too coherent to boot – Stewart doesn’t like him). Accordingly, Stewart – a graduate of the staunchly unaccredited Hyles-Anderson College – has for instance managed to become something of a favorite at FSTDT (some here).

Stewart’s website, Jesus Is Savior, concerns itself with familiar themes such as King James-onlyism, Anti-Catholicism, and the evils of rock (Led Zeppelin is dealt with here), including Christian rock (“Christian rock is evil” here), pop and country music (“country music is filthy” here). Part of the point is the old adage that “the Devil has the best music,” which Stewart takes to be a completely serious and true statement (and a slight against religion), concluding that virtually all modern music is ‘Satanic’. Even with regard to these rather common nuttyisms Stewart has his own … style.

But there is more. One recurring idea is that “Oprah is the Most Dangerous Woman in the World!” because she is a New Agie (here; the conclusion is not wholly unwarranted, but the way Stewart gets there deserves to be seen). By contrast, the most dangerous television show ever is apparently Hee Haw (“No doubt, Hee Haw destroyed many marriages and families with their whorish lascivious programming”).

A mainstay of his website is his attacks on other Christian apologists for failing to be sufficiently fundie: Ray Comfort and Kirk Cameron, for example, are too affiliated with ‘Satanic’ Hollywood, and even Martin Luther King Jr was a communist and “an Imposter” – MLK is for instance recognized as a good guy by Christianity Today, which also “promotes Rock Music, Witchcraft, Homosexuality and Satanism,” so he should be viewed with … well, according to Stewart “evidence proved that King was under the direct orders of Soviet spies and financed by the Communist Party,” and the FBI tapings of him in the 60s “developed shocking revelations regarding King’s sexual practices.”

The main problem, however, was King’s campaigning for social justice, which to Stewart is “nothing less than a continued Communist conspiracy to destabilize America. This ‘social justice’ has spawned feminism, homosexuality, gay-marriage, abortion, and a host of other evils in America. […] The social justice which King propagated was […] largely a campaign to morally bankrupt America. Communism found a willing servant in Martin Luther King Jr. Today, America is largely Communist.” It should come as little surprise that feminism is evil – a woman’s place is in the home and subservient to her husband. When reading Stewart you should probably keep in mind that feminism, abortion and Lesbianism all mean the same thing). Indeed, feminism is “mass media control as part of a long-term plan to enslave humanity”, because the Rockefellers “want to chip us” and feminism “has women freezing eggs.” Women wearing trousers is unbiblical, as is men wearing kilts (“One only has to look at the above photo to see what's wrong with kilts or skirts on men. It’s disgusting!”)

Unsurprisingly, Stewart is also a 9/11 conspiracy theorist and deeply into New World Order/Illuminati conspiracy theories. Nor is he a fan of evolution. Indeed, he has a substantial section of his website dedicated to “debunking” evolution with links to a variety of crank sources as well as some novel, home-made crazy. Apparently, the idea of evolution was created by the Illuminati as a justification to bring about global communism. He rejects anthropogenic global warming for much the same reasons.

There is also a bit of regular politics, along the lines of “The Bill of Rights does NOT grant rights to homosexuals, abortionists, witches and other immoral groups who do evil. Genuine freedom can only be established and maintained by unwavering faith in God.” Here is his support for Michael Marcavage, guest-authored by … Michael Marcavage and entitled “God Bless Michael Marcavage”.

Here is a sample of his views on atheism. Not only is atheism Satanic, according to Stewart, “atheists now rule most of the world”. Of course, Stewart includes James van Praagh, all Jews and Muslims, and Martin Luther King (that communist) among the atheists, which makes the claim easier to back up in one sense.

I am not completely sure whether this commentary is a poe or not.

Diagnosis: A very angry man, Stewart has managed to make a name for himself, but probably not in the way he hoped. Probably rather harmless. But he is, indeed, pretty angry.
Posted by G.D. at 10:46 AM