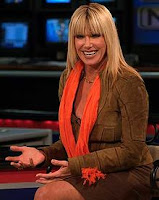 Suzanne Somers, erstwhile TV celebrity associated with shows such as “Step by Step” and “Three’s Company”, is a prominent ignorant-celebrity-turned-self-help-guru. Among her bestsellers are “Ageless: The Naked Truth About Bioidentical Hormones”, which peddles T.S. Wiley’s scientifically unproven and demonstrably dangerous Wiley Protocol, and “Knockout: Interviews with Doctors Who Are Curing Cancer – And How to Prevent Getting It in the First Place”, hardcore cancer woo and conspiracy theories packed into the effective “who cares about clinical trials when we have anecdotal evidence and celebrity testimonials” rhetorical package. Her cancer writings have received apt criticism from the American Cancer Society. Of course, Oprah endorsed it (and received pretty harsh criticisms for it).

In 2001, Somers was diagnosed with breast cancer and declined to undergo chemotherapy (in favor of anthroposophic medicine). She claimed she was diagnosed with “inoperable cancer by six doctors”, which is false – even her doctors did not uniformly recommend chemotherapy, quite the reverse (and she did undergo lumpectomy and radiation, but according to herself it was of course the completely ineffective anthroposophic medicine that did the trick). She was furthermore (possibly) misdiagnosed in 2008, an event that (“invalidated Western medicine” and) seems to have spurred her bizarre crank adventures. Her interviews with frauds and cranks (such as Nicholas Gonzalez, Russell Blaylock, Stanislaw Burzynski, Burton Goldberg, and Jonathan V. Wright) over the course of 2008 provided the foundation for Knockout, which concerns alternative treatments to chemotherapy (and reality). The oncologists don’t understand cancer, you see. Fortunately Somers does it for them. Or it’s the conspiracies. According to Somers “Chemotherapy is big business, and the business end has been thoroughly thought out. Our med students are taught the company line, and after years of being intensively taught how to administer poisons, they are then graduated to go out and give these lethal medicines. To question this would discourage financial grants, and no one wants to be cut loose from pharmaceutical funding”. Then of course there is the Galileo Gambit (which Julian Whitaker invokes in the foreword to Somers’s book and Lee Schneider invokes at HuffPo).

Somers is also a water fluoridation conspiracy theorist and well into stem-cell woo.

Diagnosis: Ignorant dunderhead. Lacks any trace of a clue about pretty much everything she writes about and in possession of the critical thinking skills of a mole in a whack-a-mole game. She is probably being widely read by a host of other critical-thinking-challenged people (that is, the “critical-thinking-means-feeling-your-way-to-the-truth” crowd), and must as such be considered a threat to civilization.
Posted by G.D. at 7:37 PM