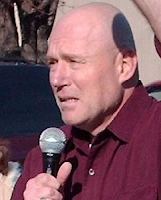 Rusty Lee Thomas (from Waco, Texas) is a proponent of militant Christianity affiliated with Elijah Ministries and the Constitution Party, and one of those people who are organizing and training young Christians to be soldiers for Christ and go out there to engage in spiritual warfare against the evils of the modern world (science, secularism, universal human rights, and so on). It’s not obviously supposed to be purely spiritual either: “Without the shedding of blood, there is no remission of sins.” He has even written a manual for young warriors. Among the main enemies identified in this manual is … well, this quote gives you the idea: “Feminists charge that Christianity promotes a patriarchal religion, which oppresses women and steals their potential. Although it is true that Christianity is patriarchal, the function of true patriarchy is to protect, provide, and care for women and children. Biblical patriarchy is expressed as chivalry […] A woman can manipulate, dominate and control a man to the point that his manhood is slowly eaten away like a cancer […] Too many women seek value by trying to become men, lead as men, and be aggressive as men.” The ideas are discussed here. Clearly Thomas is the real feminist in the culture wars.

The following is from one of his “reports”: “I've been on a forty day fast. Today is the 19th day. The purpose was to end the American holocaust (abortion) and usher in a heaven-sent revival. Little did we know that at the beginning of this consecrated time that the homosexuals in San Francisco would blaspheme the Lord in the most despicable manner. They held a mock Last Supper advertisement to promote their ‘gay pride’ and perverted orgies in the streets of their city. […] I asked God for the message and for the method to warn that wicked city that they have crossed the line and are in deep trouble with the Almighty. 3 days later the Lord gave me the Word and the method. It is called God's Eviction Notice. Tomorrow morning this message will be sent to all major news outlets in America. […]” The Eviction notice in question? “[Insert garbled, hysterical theological ramblings and Biblebotting here] … The Lord God of heaven and earth, the Triune God of the Bible, God the Father, God the Son, (Jesus Christ) and God the Holy Spirit has a charge to bring against this wicked city and the inhabitants thereof. […] His patience with these abominations has ceased. […] God has weighed San Francisco in the balance and your city has been found wanting. Your many transgressions reveal not just the revelry of sexual immorality and lusting after strange flesh, but a God-mocking, God-hating spirit that is Anti-Christ to its core […] The tragedy of New York and the disaster of New Orleans are merely first fruits of the many woes that will devastate San Francisco and send shockwaves throughout California, America, and the world. God stands poised with his flaming sword ready to strike your city [and so on …] You must stuff these abominations back in the closet of illegality and punish these criminal acts as God prescribes or your entire house (city) will collapse upon your wicked heads. With all diligence, take heed to this warning, repent or perish, Christ or chaos.”