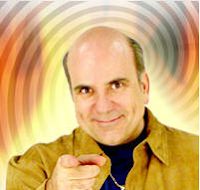 Joe Vitale appeared in The Secret, and is in general a staunch defender of the existence and efficacy of the law of attraction, claiming that it is, indeed, an exceptionless physical law, just like gravity (though scientists don’t want you to know about it for somewhat unclear reasons). Just like gravity “[t]he people who say attraction is not a law cite examples such as, ‘I know gravity works. When I drop a book off a skyscraper, it will hit the ground. That's proof of the law of gravity.’ Agreed. They then go on to say, ‘When I try to attract something, sometimes I get it and sometimes I don't. So it isn't a law.’ Not agreed. Here's why. Saying you tried to attract something and failed is like saying you tried to drop a book from a skyscraper to hit a particular spot and you missed. Because you missed the spot, you say gravity doesn't exist.”

Convinced yet? It's just like starving children just aren't good enough at actually wanting food. Given the lawlikeness of the Law of Attraction it should be noted that it does not seem to work for Vitale himself (yes, the linked claims are some of the feeblest non-sequiturs and most insane arguments by assertion ever). Vitale’s favorite trick is the argument by analogy, and his attempts are well and truly beyond insane. And to drive the point home: “How does [the law of attraction] work? Nobody knows. Just like nobody knows how electricity works. I don't, do you?” (Despite his other actions being evidence, it is hard to believe that Vitale actually thinks this argument carries weight). Vitale has of course been backed by Oprah.

Vitale is, unless he is a fraud, an exceptionally tottyheaded loon (leaving open a small chance of just fucking around for fun). One reason to suspect fraud, however, is the fact that Vitale is a former Amway executive, though he may have been attracted to Amway because of his susceptibility to things like The Secret.

Vitale also provides health advice, particularly Frank Mangano’s “blood pressure miracle”, which claims to be able to reverse hypertension “naturally” without drugs. His area of expertise is self-help, however. Among other things, he’s written the book “Hypnotic Writing”. Hypnotic writing is apparently a form of waking hypnosis. When you learn hypnotic writing, you can actually hypnotize people with your advertising. That’s probably a useful skill.

Indeed Vitale usually titles himself as “Dr. Vitale”. His "doctorate" is from the University of Metaphysics, and his dissertation can be found here). He is married to Nerissa Oden, who thinks that “[e]ven stage 4 pancreatic cancer can be reversed with diet changes, taking targeted supplements and detoxing” and that “Kevin Trudeau is a major health and wellness advocate”. (Trudeau is apparently a buddy of Vitale’s).

Diagnosis: Vitale is either in possession of an exceptional lack of reasoning skills, perception and rationality, or he is a fraud. Or a mix. Either way, he belongs to the far end of the self-help bunch (the secular counterpart to the prosperity gospel), but cannot be completely written off as harmless.

Anti-dote: Barbara Ehrenreich's superb piece pointing out that too much positive thinking can be bad for you.
Posted by G.D. at 11:45 AM