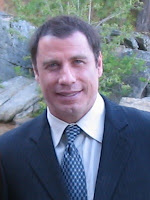 John Travolta is a scientologist most notable (if not most famous) for starring in the legendary movie “Battlefield Earth” – a movie adaption of L. Ron Hubbard’s work – and for his involvement in scientologist humanitarian efforts.

Travolta’s leadership of the scientology effort in the aftermath of the Haiti earthquake deserves particular mention. First, scientology runs its own corps of whackers, the Scientology Volunteer Ministry (SVM). SVM’s job is to make the Church's good humanitarian works visible to the media at any opportunity, but even the media has had a tendency to notice that they are epically incompetent at providing the humanitarian services they purport to provide. For instance, the SVM notoriously got in the way at 9/11 and the Haiti earthquake – as whackers are wont to do. A marvelous description of their Haiti effort is provided here, the purpose of which was to provide scientology’s own version of faith healing. Another newspaper article that subtly hints at Travolta’s lack of awareness is here. In fairness it should be mentioned that Travolta flew in real doctors and medicine as well.

Travolta has generally been a more lowkey scientologist than Tom Cruise, but secured an entry in our Encyclopedia when he blamed the Virgina Tech shootings not on the lack of mental healthcare, but on the mental healthcare itself, i.e. psychiatric drugs.

This one is also illuminating (if not sufficiently backed up to be regarded as fact).

Diagnosis: More a nuisance than an actual danger, Travolta’s misguided efforts on behalf of scientology at least qualify him as a serious loon. Scientology faith healing is no more silly than reiki or other kinds of faith healing, but that would still make it awfully silly.
Posted by G.D. at 12:25 PM