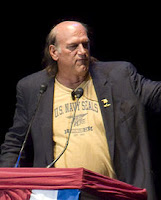 Jesse Ventura, a former Navy SEAL and professional “wrestler”, probably reached the peak of his political career when he played a prominent role in the masterpiece “Predator” (with Schwarzenegger and Sonny Landham). He later went on to become governor of Minnesota, a role in which he was known as crazy but with a few, intermittent flashes of brilliance. Some of his outbursts were received with mixed feelings, however, such as “organized religion is a sham and a crutch for weak-minded people who need strength in numbers” (Ventura has identified himself as an atheist) and “ [u]ntil you've hunted man, you haven't hunted yet.”

That was back then, when he still had the mental acumen necessary to manage to categorize Predator as fiction. Currently, Ventura is a batshit tinfoil addlepate conspiracy theorist who does his best to give Jeff Rense and Alex Jones runs for their money. He currently has his own TV show, Conspiracy Theory with Jesse Ventura, and despite what self-deluding fans may claim: Ventura does not just inquire into these matters to provide cheap entertainment for the masses. Ventura wears his tinfoil hat with pride.

He is particularly fond of 9/11 conspiracy theories, endorsing (on Alex Jones’s show, no less) the “controlled demolition” idea. Of course, he doesn’t explicitly endorse it – he is just JAQing off. Which means that he rather explicitly endorses it.

Ventura has also written a book, “Don’t Start the Revolution Without Me”, in which – according to his agent – Ventura reveals “why he left politics and discussing the disastrous war in Iraq, why he sees our two-party system as corrupt, and what Fidel Castro told him about who was really behind the assassination of President Kennedy.” A pity; he almost managed to stagger his way to the finishing line in that blurb.

Diagnosis: A sad case, really, of an otherwise once intermittently moderately intelligent person donning the tinfoil hat. I think the idea was to stare just a little into the abyss, but Ventura unfortunately didn’t really have the critical thinking skills needed to do this safely.
Posted by G.D. at 11:59 AM