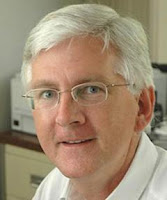 A.k.a. Official Climatologist of the Rush Limbaugh Show

Roy W. Spencer is a climatologist and a Principal Research Scientist for the University of Alabama in Huntsville, and one of a few climatologists who rejects (pretty much) AGW. Spencer is also an Intelligent Design creationist: “I finally became convinced that the theory of creation actually had a much better scientific basis than the theory of evolution, for the creation model was actually better able to explain the physical and biological complexity in the world ... Science has startled us with its many discoveries and advances, but it has hit a brick wall in its attempt to rid itself of the need for a creator and designer.” He is demonstrably completely ignorant about evolution, and on that basis claims that it is pure religion.

Having shown that he has no clue about what a scientific explanation requires (hint: independent testing and confirmation), perhaps his understandings of such matters are better when he says that “catastrophic manmade global warming” is not occurring (hint: no)? Concerning climate models, Spencer claims that “the people that have built the climate models that predict global warming believe they have sufficient physics in those models to predict the future. I believe they don't. I believe the climate system, the weather as it is today in the real world shows a stability that they do not yet have in those climate models.” (No evidence provided). See also this.

He also appeared in Martin Durkin’s movie “The Great Global Warming Swindle”, has claimed that environmentalism is genocide, and is one of the most ardent proponents of the DDT hoax. Spencer is nevertheless counted one of the most respected and cited and credible AGW skeptics (denialists), which should tell you quite a bit about AGW skepticism.

Diagnosis: A severe case of crank-magnetism, Spencer is your typical example of a crackpot with credentials, whose credibility is nonetheless approximately equal to Russell Humphreys’s. He is very influential, however, and a real threat to the world.
Posted by G.D. at 12:28 PM