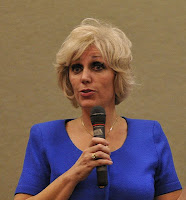 Orly Taitz is a dentist and real estate agent lawyer (paper mill diploma), and among the most prominent – and certainly most ardent, zealous, and ardently delusional – birthers (Joseph Farah is a fan). She attained national fame through TV coverage of her exceptionally wild-eyed and paranoid attempts to invalidate Obama’s presidency, including using fake (poorly forged) birth certificates allegedly placing his birth in Kenya, while claiming that she has been the victim of a liberal conspiracy whenever she is exposed. At the outset, some commentators actually thought she was extremely dishonest. It pretty soon became clear that she is a very hardcore cook. Timecube-wise.

She’s been to court several times representing a variety of loons, and received a 20,000 dollar fine for frivolous lawsuits during one particular case where she claimed that United States army personnel do not have to go to Iraq or Afghanistan because Obama isn’t really president (which is fractally wrong; this one, though, is epic; more here). The hysterical insanity of her cases, and the patience of the legal system with her, is well described here.

Of course, the smackdown added grist to her conspiracy mill. Taitz requested that the judge recuse himself “because he has equity ownership of certain securities (e.g. Microsoft and Comcast) which are aligned both politically and economically with a key Defendant in this case, namely the de facto President of the United States, Barack Hussein Obama, in such a direct and personal way that it could be said that this Judge has a financial stake in the outcome”. She also accused the judge of being part of the conspiracy to cover up Obama's citizenship, and attempted unsuccessfully to appeal her fine to the Supreme Court. She also wanted the judge tried for treason, and seriously considered to take the case to an international court and to file “a proper complaint with the Committee of the Judiciary with the U.S. House” (Taitz has also appealed to the UN for protection against the government).

Her plans include having Andrew Lloyd Webber contact here to turn her case representing Lieutenant Colonel Terrence Lakin into a musical. Lloyd Webber has thus far not engaged with the project.

Taitz’s view of reality also includes such things as “[i]f Obama is not legitimate, neither are his appointments, including his pick of Biden. We will need to have a new election ASAP, before these diabolical psychopaths completely destroy US economy, currency and unleash some bio engineered swine flu virus as an excuse for martial law and suspension of our constitutional freedoms”. Remember that this comes from a person who calls herself a “constitutional lawyer”. An excerpt from an illustrative interview is here.

In 2011 she attempted to run for California secretary of state, but was crushed in the primaries, explaining her defeat as a result of the Obama administration’s shadow campaigns against her since they view her as a threat. Not having learned her lesson the first time, she subsequently entered the race for the United States Senate instead. “I think I do have a chance specifically because I do speak Spanish and I speak Hebrew,” said Taits, apparently worrying less about what she uses the languages to say. Her first campaign ad is here, and it is absolutely magnificently. (The point she makes about having escaped from the bloodshed caused by Hitler and Stalin to ener the US should be understood in light of the fact that she is born in 1962.) She lost rather badly in the California Republican primaries this time around as well. Afterwards she teamed up with Sharron Angle to form the craziest tag-team ever and to combat voter fraud (after all Angle says voter fraud is the only reason she lost the Senate Race to Harry Reid in 2010).

In 2009 there was some brouhaha related to Taitz’s website defendourfreedoms.net. The website suffered some technical problems, which Taitz’s blamed on the Obama-connected hackers that were, supposedly, also behind ruining her first blog. The real site owner later discovered that the problems were due to a third-party data mining application Taitz had installed because, well, who knows. She had also installed the application on her first blog, and it was the cause of the trouble here as well. (Described in more detail here)

Lately Taitz seems to have toned down her legal tactics (not completely, though, and she recently lost a suit in which she tried to force Occidental College to release Obama’s undergrad transcripts and financial aid information, which is absolutely illegal) and entrusted those to zombie birther Joe Arpaio. Instead Taitz appear to be targeting representatives directly, and does indeed succeed in finding some serious lunacy. In November 2011 she threw a tantrum before the New Hampshire Ballot Law Commission when calling for the removal of President Obama from the state’s presidential ballot, and received staunch support from state representative Harry Accornero, who referenced the “overwhelming” evidence against Obama being a natural born citizen, and Susan DeLemus. After the hearing said representatives went (literally) violent, forcing the more sane members to actually having to run for safety.

As of December 2012 she seems to have found a client even crazier than herself, one Keith Russell Judd.