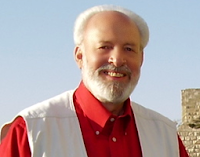 Jimmy DeYoung a noted prophecy teacher and conference speaker with a Bible school “doctorate”, a radio host (WNYM in New York), author, and producer of much audio and video material on the standard batshit crazy endtime stuff, which he fully endorses (yes, he is one of the RaptureReady guys). DeYoung is currently actually located in Jerusalem, presumably as a means to being able to experience the imminent endtimes first hand, to evangelicize (bring Jesus to the Jews), and to convey garbled idiocy in the form of opinion pieces back to his US audience about the persecution of Christian majority everywhere. His knowledge of Middle Eastern politics is breathtakingly lacking for someone who has lived there for even a short time, but he seems to try to make up for the lack of insight in appallingness and insane conspiracy theories.

Among his video productions is The Daniel Papers and its accompanying study guide, which explains Daniel's calculations for the coming of the Messiah, his outline of the end times, and his description of the coming seven years of tribulation. Among his more outré beliefs is the claim that the Ark of the Covenant must be found in order for the Jewish people to build the Temple. “I believe it is underneath the Temple Mount,” said DeYoung, because prestigious rabbis have (apparently) been “mere inches” from seeing it. He doesn’t seem to mention Ron Wyatt, and is apparently also semi-oblivious to the fact that it is dusting away in an American storehouse, as per the real-time documentary “Indiana Jones”.

Here’s DeYoung on Glenn Beck. Although DeYoung “agrees with him politically” he can unfortunately not accept Beck as a spiritual leader because Beck is a mormon.

Diagnosis: Breathtaking moron
Posted by G.D. at 8:08 AM