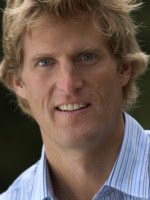 Mason Howe Dwinell is one of the most seriously crazy people in the US, and imagine the competition for that title! Dwinell is an acupuncturist, though more notably he is perhaps the US’s most prominent promoter of … sungazing, the seriously crazy and appallingly dangerous idea that humans can absorb the sun's energy directly and efficiently through their eyes by staring into the sun for extended periods of time. By doing so, you can allegedly in principle absorb so much energy that you won’t even need food (no, the sungazers haven’t really managed to grasp the idea that humans lack photosynthesis). As an obvious consequence, sungazing is also promoted as a solution to world hunger and other global problems – they don’t really need food.

It really isn’t a good idea. When Dwinell was tested, doctors did indeed find a burn in the center of his retinas. The finding apparently made Dwinell disheartened and discouraged, and he even apparently stopped sungazing for a while, but he eventually picked it up again because he is rather seriously insane.

Apparently the idea has some traction in India, and one supposes the fascination for all things Eastern is what has led some to pick it up in the US as well. In particular, the claims of one Hira Ratan Manek, who claims to have lived without food for 41 years, seem in particular to have motivated Dwinell to live out his lack of aptitude for reality (his own description of how he came to the practice is here). Manek and Dwinell were heavily featured in the documentary “Eat the Sun” (good review here), produced by one Alexis Cohen of something called Morning Sky Public Relations (“I think it's fair to say that there are a couple of universal concepts that are widely accepted truths cross-culturally: 1) If you look directly at the sun (for a long period of time) you will go blind. 2) People have to eat. I was really drawn to the idea that there were people out there challenging these deeply held beliefs.” Duh)

Dwinell is also the author of “The Earth was Flat: Insight into the Ancient Practice of Sungazing”, where he elaborates on his delusions. The technique has also been promoted by Kevin Trudeau but some have floated the suggestion that Trudeau, unlike Dwinell, doesn’t always believe everything he promotes. Apparently it is popular among certain groups other places in the world as well.

Diagnosis: In urgent need of serious professional help. Despite the total insanity of his claims, there is unfortunately also a real danger that some people may actually listen to him (they have). At least he seems to be genuinely believing the stuff he promotes, but it is less than clear whether this is extenuating or aggravating.
Posted by G.D. at 4:53 AM