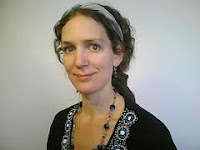 Laura Magdalene Eisenhower is Ike’s great granddaughter and completely batshit insane. According to herself, she is a “soul-reaching teacher and healer, recognized by clients, psychics and spiritual societies, as a living global oracle and true archetype of Sophia-Magdalene on Earth,” who “has masterfully woven together the esoteric and alchemical aspects of nature with our ancient roots, the present world, and our future potential. [… She] has been on an intense world soul journey of the labyrinth through the many faces of the Goddess (http://rationalwiki.org/wiki/Goddess_religion). With great passion and courage, she is helping to return sacred union (Christ Sophia).” Most of that is borrowed from the biography of her given in connection with her participation at the 2011 Dolphins and Teleportation Symposium - Andrew Basiago was there as well, and you really do have to visit their website). She seems to have come to public attention as a brave whistleblower when she exposed her attempted recruitment by a secret governmental Mars colony project, the purpose of which was to provide a survival civilization for the human race on Earth in the event of a planned (HAARP or bio-weapon induced) or natural cataclysm (solar flares) that would depopulate the Earth. (Discussed here)

It is a little bit sad, really. She apparently really, really, wants to be as important and influential as her ancestor and when the dream of political influence was thwarted, then, well, in her own words: “My great-grandfather President Ike, who was also the Army general who led the Allied Forces to victory over Hitler, battled evil corrupt powers on Earth and took on some of the most challenging scenarios in history. As I grew up, I could sense that I was completing this battle that has ancient roots. When Hitler died and the Nazis lost power – the entities including those that were ET/Extraterrestrial did not. They continued to find hosts and create agreements with people who were a part of the races of the patriarch and Global Elite – who want to run things through fear tactics, control and the suppression of Sophia or the essence of the Divine Feminine.” What a pity mankind has thus far failed to recognize how Laura is special, too – as special as Ike, having built upon Ike’s efforts to reach even farther heights.

She marked the 50th anniversary of President Eisenhower’s famous Farewell Address by predicting the coming collapse of the Military-Industrial Complex and a global transformation driven by enlightened unity consciousness. It is unclear whether she thinks the prophecy has been fulfilled.

Diagnosis: Astoundingly delusional, and no, Laura: you are not a whistleblower. You are crazy. But probably harmless.
Posted by G.D. at 10:31 AM