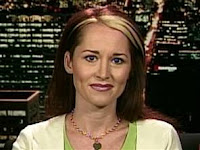 Allison DuBois is a celebrity medium, exploitainment stalwart, and dingbat, who claims that use of her psychic abilities have assisted U.S. law enforcement officials in solving crimes, a claim that forms the backdrop for the TV series “Medium”. Her purported powers have even been tested, by Gary Schwartz of the University of Arizona, no less, who claims that research supports DuBois’s assertions despite the fact that this is ridiculously false. (Schwartz, who willfully avoids any scientifically oriented methodology in the testing, and who completely fails to understand “subjective validation”, will receive his own entry in due course.) According to DuBois, “I call things like I see them and I am not afraid to push the boundaries of my abilities under university research conditions. I pride myself on accuracy, consistency and easing the pain of those who have lost loved ones.” Which is how she came to work with well-known hack Schwartz. DuBois and Schwartz have declined Randi’s one million dollar challenge, by the way, for reasons that are fairly obvious, and with excuses that are hilariously feeble. DuBois’s alleged contributions to high profile investigations have been shown to be worthless and misleading (insofar as anyone actually believed her), but that’s because DuBois is as much a fraud as a loon. She doesn’t like skeptics, claiming that “I’ve never heard of a skeptic helping anybody with their skepticism. To a large degree, they just want to shame somebody so they can feel greater than them,” which would have sounded slightly better if DuBois had ever actually helped anyone herself. There’s an excellent analysis of her bullshit here.

The TV series “Medium” seems to have been a moderate success. In real life, though not consistently in the series, her primary trick is good ol’ cold reading of her victims. Of course, Oprah buys it cheaply, but then Oprah isn’t exactly celebrated for her critical thinking skills. Fortunately for DuBois, mass media is more than happy to provide a platform for her dishonesty as well, a good example being Allen Pierleoni’s article “The medium has a message” for the Sacramento Bee, discussed here.

Diagnosis: Scam artist and sorry excuse for a human being, who preys on the sorrows and fears of people in difficult situations. An absolutely repugnant character, and one who has managed to achieve a rather frightening amount of influence.
Posted by G.D. at 6:58 AM