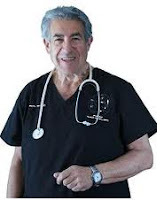 Being a medical doctor is no guarantee for reason- and reality-based approaches to health, and there are plenty of offenders. Mayer Eisenstein is among the worst and is, among other things, an antivaxx loon as well as purveyor of a wide range of “questionable” (i.e. completely scientifically unsupported) treatments. He fancies himself something of a truth-teller, and warns families that pediatricians (pediatricians are “as heinous as the Nazis”) and pharmaceutical companies are harming children with unnecessary drugs and vaccines. He and his practice, the holistic Homefirst, are, however, most famous for being on the losing side of one of the largest U.S. jury verdicts awarded to the family of a newborn in a wrongful-death suit – court records show that families of dead and brain-damaged children repeatedly alleged that doctors who work for Eisenstein had made harmful mistakes for more than three decades (Here’s one of the employees, Peter Rosi, commenting on that): according to Rosi it wasn’t them; rather, the majority of doctors are just conspiring to “get them”, and besides “Eighty percent of complications in childbirth are psychological,” said Rosi. “Babies can be killed by a mother's attitude.” How could they lose with luminaries like Rosi to defend them?) Though Eisenstein claims to have seen “virtually no autism” in his patient pool of thousands of unvaccinated kids, the court records rather emphatically show that there is lots of stuff Eisenstein doesn’t see because he doesn’t want to (no, he has absolutely no data to back up his assertion, but hell if it hasn’t been used for all it isn’t worth by other antivaxx cranks such as Dan Olmsted).

Eisenstein is the founder of the Autism Recovery Clinic in Rolling Meadows (Michigan, I think), where he treats autistic children with Lupron, well known as a treatment regime based on junk science. He is, of course, not board-certified in any of the specialties relevant to autism or the use of Lupron, including pediatrics, endocrinology, neurology and psychiatry. But he knows how to peddle unsupported woo to his patients, and is in particular a fan of Gary Null’s miracle therapy: vitamin D – not only does vitamin D allegedly prevent the swine flu (a government conspiracy anyways); it even prevents autism: “No Vaccine and More Vitamin D = No Autism,” says Eisenstein. By a stroke of sheer luck Eisenstein’s wife owns a natural pharmaceutical company, so he can offer to sell you Vitamin D really cheap.

Eisenstein is a pretty well-known figure in the anti-vaxx movement (especially at its more batshit fringes), and at least he doesn’t beat around the bush: “Read my books, all vaccines cause brain damage,” says Eisenstein. One of his books, “Make an Informed Vaccine Decision for the Health of Your Child” (written with one Neil Z. Miller) is reviewed here. And yes, it repeats every antivaxx myth known to man, and no new data to back them up. (Some of his desperately fallacious video rants and online antics are mentioned here) He is also on the Board of Directors of Medical Voices Vaccine Information Center, which is hardly a trustworthy source of information.

Diagnosis: An evil person. He doesn’t realize that he is, of course, but he is – large amounts of zealous lunacy can be sufficient for evil, and given the harm caused by Eisenstein in his campaign against reality, it is pretty clear that he qualifies.
Posted by G.D. at 11:26 AM