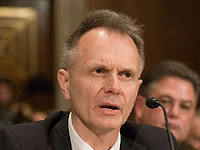 David Deming is a geologist, geophysicist and associate professor of Arts and Sciences at the University of Oklahoma. He is also a staunch wingnut and adjunct faculty member at two wingnut think tanks, the Oklahoma Council of Public Affairs and the National Center for Policy Analysis. He is probably most famous for his anti-environmentalism, partially based on the idea that “sustainability” is a misleading concept – technology will save us anyways, so it’s nothing to worry about (he is nevertheless opposed to investing in renewable forms of energy instead of oil and natural gas).

Of course, to run these kinds of arguments, Deming needs the convenience of global warming denialism. And indeed; according to Deming global warming is “media hysteria … generated by journalists who don’t understand the provisional and uncertain nature of scientific knowledge.” There is, according to Deming, “not one person on Earth who has ever been killed or harmed by global warming.” Besides, global warming is driven by natural forces and we can’t really know what’s driving it. And it isn’t even happening. At least not since 1998: “the mean planetary temperature hasn’t increased significantly for nearly nine years [2007].” (And “the last two years of global cooling have nearly erased 30 years of temperature increases. To the extent that global warming ever existed, it is now officially over.”)  Pick whichever is most convenient. At least he impressed senator James Inhofe, who included him on his list of 650 scientists who supposedly dispute the global warming consensus

But there sure is a conspiracy! “A major person working in the area of climate change and global warming sent me an astonishing email that said ‘We have to get rid of the Medieval Warm Period,’” after Deming had managed to gain acceptance in the club by pretending to be one of them. Of course, he offered no evidence, name or elucidation of “major” (context here). Seems a bit like all those unnamed physicists and biologists Kent Hovind ends up sitting beside on planes and who confidentially admit to him that cosmology and biology is really bunk.

Deming is also a signatory to the Discovery Institute’s petition A Scientific Dissent From Darwinism, though he does accept evolution and has claimed that Intelligent Design cannot be formulated as a scientific hypothesis and is scientifically useless. Political alignment and expedience seems to be the best explanation in this case, as it frankly seems to be for most of the views he has been caught defending.

He’s also into MRA stuff, backing up his arguments by pseudo-biology. Go figure.

Diagnosis: A good example of what happens when otherwise intelligent people start viewing reality as supervening on political expedience. Zealous denialist, and dangerous.
Posted by G.D. at 4:21 AM