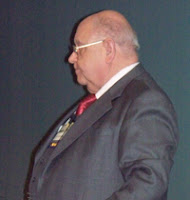 Dave D’Onofrio appears to be a creationist and David Abel’s coauthor on those few papers they actuall got published in some low-tier but peer reviewed science journals (and has accordingly been lauded by the WND as making significant scientific breakthroughs) but I struggle to find much further information about him. We’ll leave him be for now.

Kurt Donsbach, however, is a legend. Donsbach is an unlicensed chiropractor and altmed promoter, whose Hospital Santa Monica operated in California until 1987, whereupon it moved to Mexico and was in operation until the death of Coretta Scott King – widow of MLK – while under treatment at the clinic in 2006, when Mexican health officials promptly shut it down. Donsbach moved his practice to Mexico after several troubles with American authorities, first in 1971, when he was convicted of practicing medicine without a license in California after undercover agents observed him prescribing unproven remedies and claiming e.g.  that various vitamins, minerals, and herbal tea were effective against cancer, heart disease and emphysema to patients while claiming to be a medical doctor. Many of the remedies prescribed were only available from Westpro Labs, a company – coincidentally, of course – operated by Donsbach himself. (He pleaded guilty and received a fine and two years’ summary probation).

Coretta King was one of many desperate people who sought out Donsbach’s clinic during its two decades of operation in Mexico, where they would be treated with vitamins and herbs, iron lungs, and a variety of other useless procedures (the clinic was recommended to King by members of her church.) Of course, clinics like Donsbach’s thrive on survivors providing compelling (and personalized) anecdotes and the dead telling nothing, which they usually don’t unless the victim was a celebrity of sufficient note for the press to care. Had it not been for King, who knows how long Donsbach would have been allowed to continue.

Donsbach’s list of troubles with the authorities is extensive, though. Apart from the 1971 incident and the 2006 closing of his hospital, incidents include at least the following:
- In 1973, he was charged with nine more counts of illegal activity, including misbranding of drugs and manufacturing drugs without a license.
- In 1974, he was found guilty of violating his probation and was fined again.
- In 1975, Donsbach owned and operated Metabolic Products, a company that marketed supplement products with claims they didn’t bother to back up. That year, he also began his fourteen years of service as board chairman of the National Health Federation, a true quack organization if there ever was one.
- In 1976, he acquired a license to practice naturopathy in Oregon, based on a document that was later revealed to be a forgery (authorities prohibited him from holding the license in 1990). If you have to commit fraud to be able to even practice naturopathy …
- In 1979, he began operating Donsbach University, a nonaccredited correspondence school that awarded bachelor, master, and doctoral “degrees” in nutrition. That the “institution” was  unaccredited did not deter Donsbach from claiming that it was (by the National Accreditation Association, which consisted of a telephone in the living room of a single quack with a fake degree in Maryland – the California Department of Education was not impressed). He was also operating the International Institute of Natural Health Sciences, through which he marketed numerous misleading publications and a “Nutrient Deficiency Test”: The test consisted of a questionnaire about symptoms, and the answers were fed into a computer that issued a report of supposed nutrient deficiencies and medical conditions – the answers, however, did not affect the printout of supposed deficiencies in any systematic and reliable way.
- In 1982, Donsbach formed and became board chairman of Health Resources Group, Inc., which sold supplement products to health-food stores through HRG Enterprises and a multilevel company named Nutrition Motivation.
- In 1985, the FDA sent Donsbach and HRG a regulatory letter indicating that claims made for Orachel made it an unapproved new drug that was illegal to market.
- In 1985, the New York Attorney General brought actions against Donsbach, his university, and his International Institute, on the grounds that they lacked legal authorization to conduct business within the state and that it was illegal to advertise nonaccredited degrees to state residents. The Attorney General also charged that the “Nutrient Deficiency Test” was a scheme to defraud consumers (duh!).
- In 1988, the US postal service ordered him to stop claiming that a hydrogen peroxide solution he sold could prevent cancer and ease arthritis pain (it can’t).
- A 1996 case, based on a 1993 Complaint for Forfeiture, states that Donsbach obtained money from insurance companies by misrepresenting the nature and location of treatments he rendered there.
- In 1997 he was sentenced to a year in federal prison for smuggling more than $250,000 worth of unapproved drugs into the US from Mexico.

On April 9, 2009, he was arrested again, this time during his Internet radio health show, and charged with 11 felony counts, including dispensing unapproved drugs and offering neuropeptides to his patients (which contained nimesulide, which is banned in Europe because they cause high rates of liver failure and have resulted in some deaths). The case ended with a plea deal with Donsbach facing up to a year in jail, followed by probation. In 2010, however, he pleaded guilty to 13 additional felony charges, including practicing medicine without a license and selling misbranded drugs.

That should give you an idea. Donsbach himself is a pupil of Royal Lee, who – at least before Kevin Trudeau – was “probably the largest publisher of unreliable and false nutritional information in the world” (according to an FDA official). His website states that he has produced more than 50 books and pamphlets that have sold a total of 14 milion copies (most of which were titled “Dr. Donsbach Tells You What You Always Wanted To Know About …”)

Diagnosis: It’s hard to believe that Donsbach actually thinks he is helping people, but I suppose the powers of delusion should not be underestimated. At least the continued success of Kurt Donsbach demonstrates how and why there’s still a market for spam. A horrible, horrible person.

Note: Most of the information for this entry was taken from Quackwatch's very informative articles on Donsbach and his antics.
Posted by G.D. at 11:19 AM