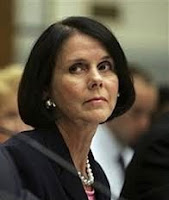 Donnelly is the founder of the Center for Military Readiness, and has spent several years in opposition to the Equal Rights Amendment as National Media Chair of Phyllis Schlafly’s Eagle Forum. Her stance is aptly summed up in her claim that “[t]he concept of equality does not fit in combat environments .... Women in combat units endanger male morale and military performance.” Sort of like how women failing to cover their hair are just inviting otherwise honorable men to rape them. In 2006, when the Department of Defense considered addressing sexual harassment and violence in the military by creating an Office of the Victim Advocate in the Pentagon, Donnelly wrote that it would serve as “an ‘Office of Male Bashing,’ which nuclearizes the war between the sexes;” in other words: Addressing sexual harassment and violence is unjustly antagonizing the perpetrators. Such is the warped world of Elaine Donnelly (and yes, she’s been pretty explicit about that being her argument). She has also said that allowing women in combat is like forcing cheerleaders to play in NFL games, which is an interesting analogy on so many levels (Sandy Rios blamed Spider-Woman, but that’s a different story).

As you might imagine, Donnelly is no fan of gays and lesbians in the military either, and she called efforts to repeal the DADT a “big P.R. campaign” (yeah …), claiming that “[t]he law is there to protect good order and discipline in the military, and it’s not going to change.” She has also “argued” that allowing gays and lesbians to serve in the military would lead to a draft, as well as “forcible sodomy,” “introducing erotic factors,” and the proliferation of “HIV positivity”. She actually used the draft argument against women serving in the military in the 1980s as well, but is apparently unfazed by the poor performance of her predictions back then. (In fact, Donnelly doesn’t even really seem to realize that her predictions have failed.)

In short, allowing gays to serve will lead to the military’s downfall. Thus, the culture of the military (yeah, that one again – think 300) is in grave jeopardy due to the “process of diversifying and imposing LGBT agendas.” Such agendas would at least put an “immediate strain” on the defense budget (no, she didn’t elaborate). Donnelly could, accordingly, not help but lament how “the civil rights movement is being co-opted by the advocates of diversity, by advocates of the LGBT equality group.” Indeed.

Allowing gays to serve in the military will also make straight people feel unwelcome: You see, not allowing straight people to throw gay people out is as bigoted as bigotry comes. Allowing gays to serve is also a threat to religious freedom, because that claim resonates with Donnelly’s target audiences; and the military evidently has a duty to prevent opponents of homosexuality from feeling offended – wasn’t that perhaps what all that civil rights stuff was all about?

Diagnosis: Completely deranged. Elaine Donnelly is a Phyllis Schlafly-protégé, for crying out loud. She is also, apparently, pretty influential.
Posted by G.D. at 9:52 AM