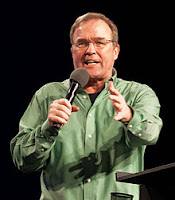 Mike Bickle, erstwhile member of the Kansas City Prophets (several of whom have later ended up in various adultery and sex-related scandals), is the leader of the International House of Prayer (IHOP-KC), which recruits young people into “radical” devotion to prayer and fasting (i.e. 24 hour praying). As such he oversees several ministries and at least one Bible school, has written a number of books, and has served as the pastor of multiple churches. He’s absolutely insane, but I guess you saw that coming.

Bickle is a hardcore dominionist who believe he is ushering in a new Christian church that will take its rightful place of dominion over every aspect of government and society, and claims to have had several encounters with God, including talking to him on a personal level on several occasions. One assumes that these conversations was what lead him to preach his premillenialism (imminent return of Jesus – but after some unfortunate incidents involving his colleagues Bickle seems to be careful to avoid setting specific dates) and pray for the spiritual salvation of the Jews of Israel. Though he is reluctant to be specific about that one (but he has claimed that the Holocaust was sent by God because the Jews refused Christ), he has been very specific about other things. In a GOD TV video about the End Times, he claimed that Oprah Winfrey will be one of the principal “pastors” of the “Harlot Babylon” (the precursor to the coming of the Antichrist), and although Winfrey is certainly responsible for much shit, this one is kinda taking the criticism in the wrong direction. Bickle predicts that progressive Christians and humanitarian activists will work with Winfrey to create a unified one-world religion based on tolerance (i.e. true tyranny, since tolerance is the same as persecuting Christians), which will ultimately be used by the Antichrist to take global power and introduce demon-worship. Bickle goes on to argue that the End Times will see marriage outlawed due to the legalization of same-sex marriage (a contradiction, but never mind): “Marriage as an institution will be forbidden in parts of the earth, as one of the signs of the times, the gay marriage agenda, which is rooted in the depths of hell, this is not about love, this is deception.” Indeed, “sexual immorality,” according to Bickle, “grants Satan legalized entry to affect our life at various levels,” and homosexuality “opens the door to the demonic realm”  – hence gays and lesbians who don’t “declare war” against their sexual orientation will face “flaming missiles of the Evil One” (like a 1st level wizard, apparently).

Bickle’s – and especially Lou Engle’s – involvement in attempts to murder homosexuals for their sexual orientation is investigated here.

Bickle is famous for being one of the main guys in Rick Perry’s prayer rally, and Perry has refused to denounce him. Cindy Jacobs credits Bickle with prophesizing 9/11.

Diagnosis: An appallingly shitty human being Bickle does his best to make the world a bad place for as many people as possible, and since relatively powerful people lend him a lot of help he has had some success.
Posted by G.D. at 1:28 PM