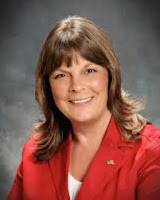 Kelly Khuri is the founder of the Clark County Tea Party Patriots, and as you’d expect a rather extreme wingnut. She’s OK with being called “extreme”, though: “Some people say I’m extreme, but they said the John Birch Society was extreme, too.” Indeed they did. Partially because the John Birch Society declared President Eisenhower to be a communist infiltrator and secret member of the American Communist Party.

She is also a global warming denialist, diligently refuting mountains of scientifically produced evidence by candid analyses: “This so-called climate science is just ridiculous,” pointing out that “I think it’s all cyclical.” And what more evidence could you possibly need when you’re the founder of the Clark County Tea Party Patriots? Take that, you scientists.

Diagnosis: Wingnut extremist. Her individual influence is probably limited, but she’s not alone.
Posted by G.D. at 10:28 AM