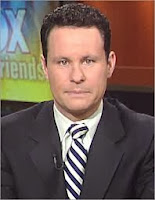 Brian Kilmeade is a FOX news host, and not a particularly bright one, as illustrated by this quote. But OK – sometimes people who are not generally loons say stupid things (or fall into the temptation to make a point they know is stupid for political purposes). So perhaps even this utterly bizarre statement can be explained away as well (also covered here). However, Kilmeade has a pretty consistent record of denialism and stupid shit falling out of his mouth. He is, for instance, a global warming denier, explaining his disagreement with science by invoking conspiracy – to the extent that even other conservative commentators have had to take him to task. Here is Kilmeade and Peter Johnson jr. whining about the mythical persecution ofChristians in the US. The observation is, as usual, that Christians are not allowed to persecute or discriminate people who disagree with them, hence Christians are persecuted.

Diagnosis: So Kilmeade is probably not very different from the usual stock of wingnut commentators, and there are many of them. But it is hard to avoid the conclusion that he is a denialist loon, and the fact that his lunacy is shared by many doesn’t make it less lunatic.