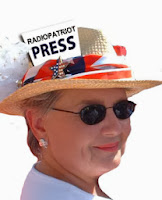 Andrea Shea King is a writer for WND and host of the Internet radio show on Blog Talk Radio where she invites wingnut luminaries from Terry Lakin to Kevin DuJan. If not an outspoken birther (we haven't been able to verify), she is at least sympathetic to the birther cause (and quite willing to edit the evidence in favor of said cause).

In fact, King is really your standard whale.to-style conspiracy theories, and has expressed what seems like genuine fear over the Muslim hordes massing on the Mexican border to overrun the country – and they are in league with Obama, who sends them subtle messages of confirmation and support. For instance, there is an official White House photo of the president with his foot upon the desk in the Oval Office, and King asks the obvious question concerning that photo: “Is it possible President Obama had a White House photographer release this official image to the world to send a wordless message of support to the Muslim Brotherhood, Arab street and Islamic community in general? To convey his disdain and disregard for all things traditionally American? It is, after all, common knowledge that the Arab world considers the bottom of one’s shoes the ultimate sign of disrespect.”

She has also devoted radio programs to “electromagnetic frequency weapons” that the government allegedly uses for mind control and to activate killers, discussing it with a range of weapons-grade conspiracy theorists, including Derrick Robinson and Max Williams of the amazing organization Freedom from Covert Harassment and Surveillance (look at the “shielding tips” on their website - yes, these are genuine tinfoil hatters!) and Dr. John Hall, “practicing physician in San Antonio, Texas specializing in anesthesiology and pain management and author of A New Breed: Satellite Terrorism in America,” as if his anesthesiology background somehow conferred any degree of expertise relevant to the latter.

To gauge her level of patriotism, this is pertinent. Yes, she wants the US to fail (though it is of course Obama who is unpatriotic).

King has also said that “Prager University is a novel educational concept with visually stimulating five-minute courses ‘taught by some of the finest, most original thinkers in the world’,” which is sort of like describing spamming as a novel for of information distribution, and easily sufficient qualification for an entry by itself.

Diagnosis: Sort of a caricature of the mindset associated with the militia movement. Delusional, paranoid and desperate.
Posted by G.D. at 12:13 PM